This definitely has a feel of David v Goliath about it, with a twist. We have a famous old club who were founder members of the Football League, have won the FA Cup four times, have taken part in some of the most famous matches in UK footballing history, and as recently as 10 years ago were playing Bayern Munich at the Allianz Arena in European competition. Then you have a team who have spent most of their history in the lower divisions, without any major trophies, who as we were drawing 2-2 with Bayern Munich were playing in the 4th tier, and who have a current ground capacity of under 13000. And yet it is Brentford who should really be cast in the role of Goliath for this particular encounter.

Whilst BWFC have been going through a near death experience off the pitch, resulting in extreme cost cutting that means all but one of our first team squad cost nothing, the Bees have assembled a talented young squad at a cost of roughly £15m, paying transfer fees of £750,000 - £3m for around 10 of their squad, all made possible by huge transfer fees received for the likes of Andre Gray, James Tarkowski, Scott Hogan and most recently Jota. Progress is also being made off the pitch with a planned move to the brand new 17500 capacity Brentford Community Stadium. Definitely a game of the haves v the haves not this.

So if both teams were operating at their maximum Brentford would be strong favourites. They play a very attractive, energetic, brand of intricate attacking football, and after some great form late last season, were some pundits tip for a play off place as 2017/18 kicked off. However they lost three of their better players to Birmingham on transfer deadline day, and failed to turn decent performances into wins meaning they are only two points better off than us, and probably as lacking in confidence, which is a problem when you try to play intricate football.

I am thinking of a team similar to the one that had the better of the game at Ipswich for long periods:

Morais and Robinson played the full 90mins at West Ham on Tuesday and may be deemed not fresh enough to start. Ameobi might be back and Andy Taylor came back against West Ham. That formation will be billed as a 3-4-3 may end up becoming a 3-6-1, or a 5-4-1 which might nullify Brentford quite well. We then just need to grab a goal from a set piece.

It will be billed as must win for us, and unpleasant and ill thought through Parky out noises will be buzzing all over social media if we don't achieve that. However, imho looking at the players on both sides we should look at this match as one we should normally lose, and one where they have the better players. Hopefully the Macron will be right behind the lads. Head is toying with 0-3 and 1-1. Heart is going for 1-0. COYW.
Top

Don't necessarily class this as a must win myself. I think this falls in the category of must not lose. Whatever addresses the slide of easy goals and lacklustre performances. We need a hearty well fought game that sets a statement of intent for the next few months. Similar to the 2-2 Leicester draw in 2001. Whatever gets us up for the fight all across the pitch.
Top

I wont be going, so I wont comment on or after the game

I must say that amongst the dross of this season's football, Bw3's thread titles have been lovely stuff. Not my words but the words of none other than Colin Murray.
...
Top

I reckon its a need to win game for the fans sake; just to hoist us up a little from the total depths. Taking all into account, it's totally candy-floss coloured day-dreaming to believe we can do anything this year except survive by the thickness of our briches arse. If Parky can manage that we should make him M ayor of Bolton not sack him.
The wisest and the best of men, nay, the wisest and best of their actions, may be rendered ridiculous by a person whose first object in life is a joke...Darcy. Pride and Prejudice.
Top

Good preview mate. The only thing I'd quibble with is an opinion: I think this is a must-win. If we can't win at home to the team second-bottom, who can we beat? To say we'd be happy with a draw in this kind of game is waving the wrong kind of white flag.

I spoke to Brentford fans last Saturday – I know a family of them and I bumped into them at a petrol station on their way home, bekitted and despondent. They say their problem is not taking their chances, so in effect they're the opposite of last week's opponents Ipswich (super-efficient). And so it seems, judging by this graphic from the ever-excellent @experimental361: 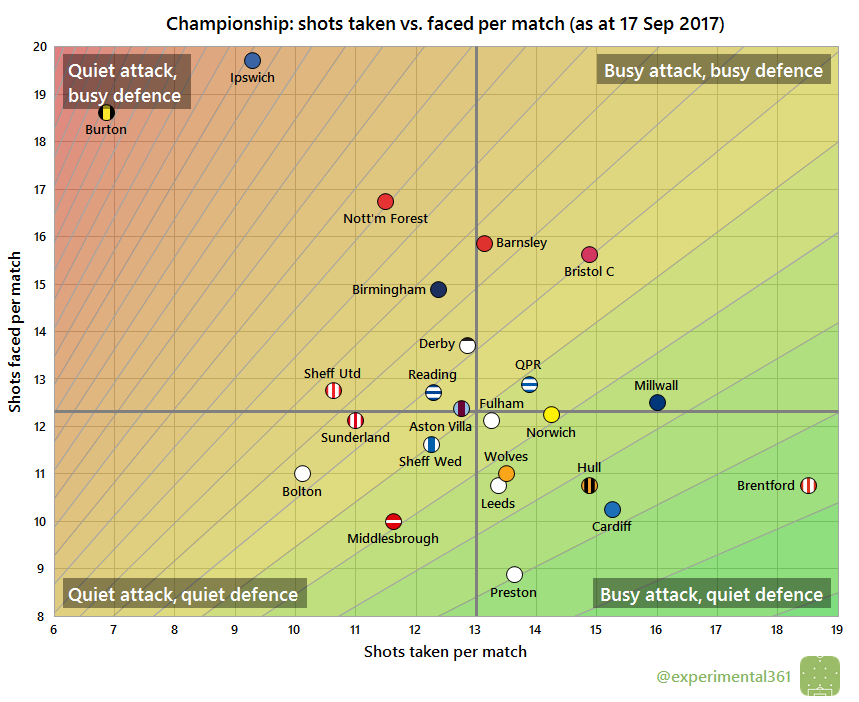 
Note how we're in the bottom left corner (quiet attack, quiet defence). We're conceding more goals than we should – lots of teams are conceding more attempts than us - but we're also unthreatening. Brentford average almost twice as many shots as us, in fact more shots than anyone else, but they're inefficient: per WhoScored, they're averaging 18.4 attempts per goal, easily the division's worst and almost three times the number needed by Burton, of all teams: 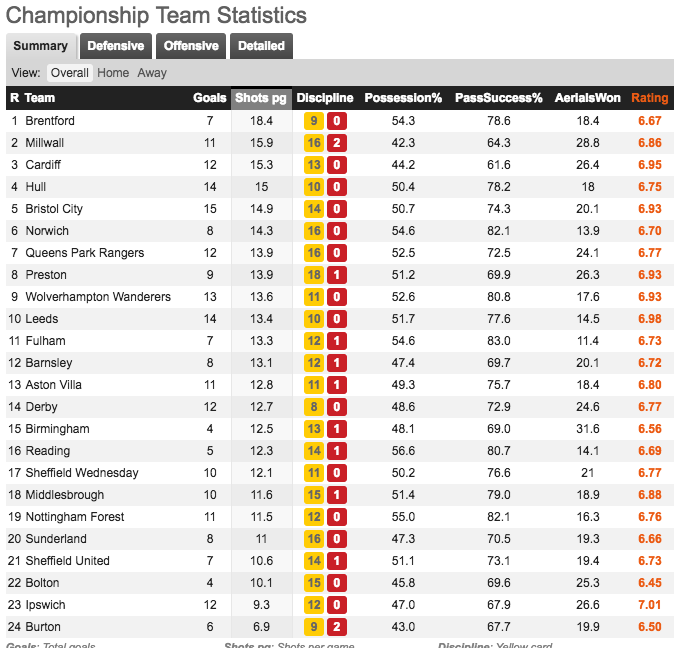 
So? So it depends. This may be a very nervous game. Both teams will be substantially changed from midweek, when Brentford were booed off Griffin Park after a 3-1 cup defeat to Norwich. This week's podcast from fanzine-turned-website Beesotted is somewhat sombre: "Things are starting to get desperate (...) The fans weren’t happy. How much longer can this go on for (...) Are Brentford lacking a leader? Is the balance of the team wrong? Are results now Dean Smith’s responsibility or the Director of Footballs’ responsibility?"

We should be well rested. Of Bolton's XI at West Ham, only Beevers, Morais, Noone and either Robinson or Taylor are likely starters, although Pratley was praised by Parky. Ameobi is back in training and in contention; he may start from the bench unless it's decided he's got 60 minutes in him. Until enough wingers are ready – Noone still isn't match-fit, Buckley may never be – I suspect Parky will lean toward the back three. I hope it works.
Words
Top

That graphic is fascinating. It really shows our issue is that we concede goals too easily (relatively few chances offered up but when we do its too often converted) and that we clearly don't create enough nor are clinical enough.

I wonder what makes a team like us concede relatively few shots/chances but a lot of goals. Quality of the keeper? Centre Halves?
Top

My opinion is that some of it is conceeding early and not threatening, teams taking their foot off the gas and keeping the ball in unthreatening positions. So if they tried we could be losing by much more.
Top

If we're pumped up, in their faces and attack minded we'll win 3-1. If we're not - we'll lose by the same score
"Get your feet off the furniture you Oxbridge tw*t. You're not on a feckin punt now you know"
Top

Iles writes that Ameobi "could feature on the bench this weekend'. PP:


He has quality on the ball and that ability to take us up the pitch with it, and we really have missed that. It’s great to have him back out there six-and-a-half weeks after his operation, so he’s on schedule. He did a tough week with the fitness guys and is ready to join in fully now, he’s ready to go.

Two winless teams, it's going to be cagey isn't it?

*This refers to the colour of our shirts and is not in any way racist.
In a world that has decided
That it's going to lose its mind
Be more kind, my friends, try to be more kind.
Top

Can't see a clean sheet. 3-2. Not sure which way. Just think we're due a few goals.
Top

I can certainly see that line of argument given they tend to shoot a lot and neither of our keepers could catch a cold.
In a world that has decided
That it's going to lose its mind
Be more kind, my friends, try to be more kind.
Top

I am likely to be at this game, and have to say I can see very bad things happening, particularly if we go behind early. It seems a bad match up for us. They have loads of pacy, young attacking midfielders and attackers, no out and out big striker, whereas we have 3 big central defenders and a midfield that struggles to lay a glove on the opposition. I can't see how they won't create tons of chances. The only hope I have is that they miss all their chances, as they have been doing, and we are a threat from set pieces, where, on paper at least, we look like we might have some joy. It is about time a team didin't take the first chance that comes their way at the Macron. COYW.
Top

Yep. We've actually started worse at home than away. So far, in the first half-hour of games we've conceded eight goals without reply, five of them at home; away, we haven't conceded in the first ten minutes (yet). Much more statistical misery to be found at the below address.
http://www.soccerstats.com/table.asp?le ... and2&tid=j
Words
Top

I'm thinking P.P. must have had a good think session about cabbages and kings, bedsheets and pitchforks and stuff, regarding tomorrow. He'll be very fully aware that a section of the fans are boiling up tar and emptying pillows of half a million feathers. He might even have mentioned to the lads that a win would be handy to ensure we don't run out of money because the fans are staying home. Based on that I'm expecting a scintillating display of aggressive dominance and a convincing win. Simple.

Ameobi not in the 18. Back three again. Armstrong starts so it might be a 3-5-2 but I suspect it'll be the same 3-4-3 shape with Arma drifting. Morais the other side, usual wingbacks and more faith expressed in Karacan and Cullen. 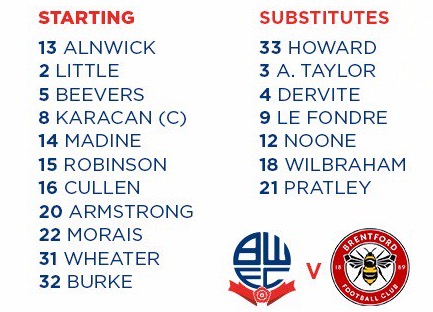 Interesting to see what our cunning plan No1 will be with Alf, Noone and Wilbraham on the bench? Anyway, just in from Jeeves duties and dog walking, so...COME ON YOU WHITES......

The wisest and the best of men, nay, the wisest and best of their actions, may be rendered ridiculous by a person whose first object in life is a joke...Darcy. Pride and Prejudice.
Top
Post Reply
84 posts