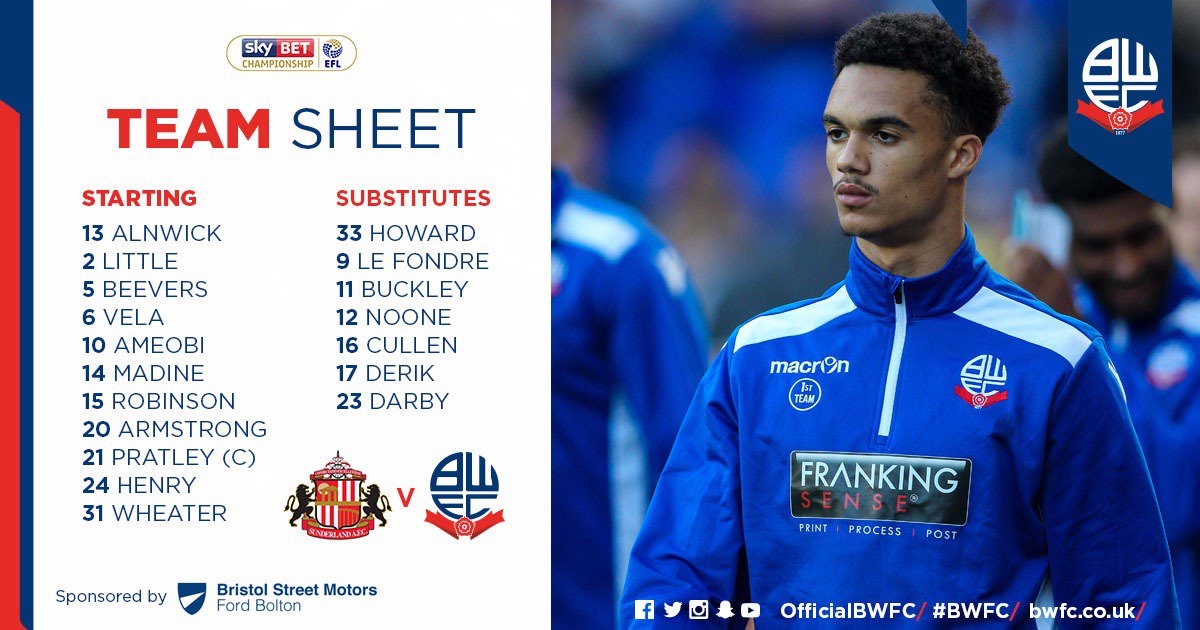 I would be more confident of us getting a result against the entire German world cup squad than Sunderland with this bloody record tonight.
Top

Concerned that Anthoneeeeeeeeeeeeeee's in, but it is what it is.
May the bridges I burn light your way
Top

I'm going to cautiously predict that we'll win by a goal.

Rememberance silence observed and away we go. Back in the white shirts and an early throw to the Cats. Madine, them, Cleared by Little and back to them for a re-run. Ben has the ball and wallops one. Madine flicks, they clear, but Robinson goes....only for a minute and...we break, Armstrong nips forth and we get a corner. And...Vela...and what the xxck is mic man on about, "purple jerseys"? ...Cleared and now it a goal kick the homers. Beevers and Robinson clear, Vela and Sammi go forth and Anthonee wins a throw. Free kick them off Madine.
Si Deus pro nobis, quis contra nos?
Top

Due to a warm-up injury, Jeff King has replaced ALF on the bench.
'Life shrinks or expands in proportion to one's courage.'
Top

Some twittering about scoring ghouls...then Ben wallops and O'Shea hands us a throw. They break and Ben clears skywards. Some scores then we get a halfway free kick. Wheats and....ohhhh, Beevers lashes one just wide after a Madine flick. Hubble Bubble, Mumble and mutter, and the homers win a corner after a dash at us. Wheats heads clear and a bit of this and that gets them another corner. McManaman won it, in and some head tennis and.....they're having some possession then Henry clears.
Si Deus pro nobis, quis contra nos?
Top

Homers sally, Wilson and Grabban come forth and....Little gets penalised for an bit of tip and tap with Ovieda. We clear, Sammi losesa out and...it ends with a throw to them. Mic man rackons Madine will get no joy from this ref...and here they come aqgain and win another corner. Short and....a bit of pull and push. Prats wins it and feeds Armstrong. Robinson's cross is too near their keeper. Sammi now, Vela, Little and....in and cleared easily. Plenty crowd noise then we have some more this and that, mainly that, and...it ends with a goal kick to us. Fifteen gone and no cigars either way as yet. Sammi now and....they clear and....Prats almost gets a card...says mic man. Robinson sees it out well and mic man has a splutter about summat or other. We sally, but they get a throw. Mic man taking things a bit for granted, then they sally and.....they try for a penalty against Robinson, to no avail. Madine, Vela, Sammi, Little and....over to Robinson and...we go offside.
Si Deus pro nobis, quis contra nos?
Top

Come on Whites, get that cushion started. Armstrong, Prats, them ...Grabban loses it, but Sammi does a bit of shirt grabbing and.....they come and....Wheat, no Beevers deflects a shot over the bar for another corner them. They're presssing but Wilson's effort comes to naught. An now, back they come again and.....some mither about Wolves, then they come again and...keep possesion. Grabban, Omiedo, Grabban again and....they get a throw. McManaman and another throw. Chat, chat.....and then Ben catches and clears. Mic lads speculating, we sally and win a corner. Come on now.....Vela and.....it seems we ae in Royal Purple again. My error. Two throw us, some scores, they head clear, Little loses out, Prats, then Ben clears to the stands. Sammi, another throw, more scores, throw them, Beevers clears and now we have teh throw. Vela, Henry, Madine getting dragged about. A bit of posssesion and....they clear. Free kick them and...Williams and...Mathews, Gibson, Wilson.....and it ends with our goal kick.
Si Deus pro nobis, quis contra nos?
Top

Sammi tries,....wins a corner..Vela and.....outswinger and...ref speaks to Sammi...Vela now and...some heading then it ends with another throw to us. Right then, mic man mithers about .....anyway, Sammi launches one and Little and....they clear the cross. Little should have shot, says micman. Thet sally, we clear, they do likewise and....we have some scores, then another throw.....Prats, they clear, Armstrong breaks and.....they clear. Robinson goes, Little keeps it going and....another corner us. ...And.....and....Vela short, Henry, Wheater heads down and...we get another corner. Vela again and....it goes to the keeper. The Cats break and sally, Robinson does well and Armstrong sends it and......Sammi scores.....

Ball came to Sammi from a Madine nod down and from theirty yards he lashed it home. What a strike...says, micman.

Natives muttering already, apparently, and Cats win a free kick of a shirt drag by Henry. They sally, Wheats clears, Williams comes forth, Mathews, McManaman and...Little knocks it out for a throw. Beevers lashes clear for a throw to them and....some dafties in the mic box, then Sammi wins a throw. And....Little nods it out for another throw and Ovieda......then Ben clears. And now.....Beevers clears, Madine, Sammi, Beevers, Robinson and....O'Shea send it back but their keeper fumbles it away for a throw. They clear and break and Oviedo....wins a throw off Sammi. Some scores, a throw to them, they break dangerously and.....they win a free kick on the box edge off Beevers. And....and...in and...Ben steps up and grabs it. Mic chat bout them, then we go with Sammi, Little and a weak cross. Back they sally via Oviedo, Wilson and....Madine almost gets on a clearance and the home support rumble angrily.
Si Deus pro nobis, quis contra nos?
Top

They dive forward but MxManaman's shot sails Wiganward. Fireworks going off around me, dog going bananas then...a bit of chat about Sammi and then they start again...Robinson clears, O'Shea gets it back to the keepoer, cleared and a poor clearance upsets the natives. More scores, mumble, mutter, they set off with Oviedo and Grabban....equalises...1-1.
Si Deus pro nobis, quis contra nos?
Top

TANGODANCER wrote: ↑
Tue Oct 31, 2017 8:32 pm
They dive forward but MxManaman's shot sails Wiganward. Fireworks going off around me, dog going bananas then...a bit of chat about Sammi and then they start again...Robinson clears, O'Shea gets it back to the keepoer, cleared and a poor clearance upsets the natives. More scores, mumble, mutter, they set off with Oviedo and Grabban....equalises...1-1.

The speed of Beevers clearly helping the lad through on goal to equalise.

Grabban was too quick for Beevers and he slotted it past Ben. Ah well, we start again. Half time goes, even Steven.
Si Deus pro nobis, quis contra nos?
Top
Post Reply
130 posts