Either we're not sure or he's not sure...

Possibly, but given the makeup of the rest of the squad I doubt we'd go into a season with three strikers for two places – one of them being a relatively untried youngster. You could say Faal is similarly unproven but it's better to have the option than not.

I wonder whether we will loan a promising young striker from a higher-division club later in the window - besides Bright Amoateng, we don't seem to have trialed many strikers in games. Or maybe they weren't all him...?
Words
Top


How did you assess the game?
Good for a large part - for 65, 70 minutes, we dominated the game. Comfortable. I saw lots of good things. We got a bit tired second half, maybe the last 20 minutes, and possibly when we're dominating the game so much, especially first half the opposition are going to change at half-time, and then they're gonna throw a different look at you and it's about where you recognise where the space is and make pitch intelligence, you know, match decisions to change up what they're doing and to counteract what they're doing. We didn't quite do that, especially the last 20 minutes. But really pleased, really pleased.

Step up in opposition, a side from a division above. Pleased?
Of course, I'm really pleased and I see us improving week in, week out, day in, day out, they're working ever so hard – the lads are even out doing extra running now. We're developing, we're still a work in progress, we're still far from the finished article, but I'm seeing lots of good signs.

A few robust challenges... how are the lads, just bumps and bruises?
Yeah, hopefully. I mean, that's football, isn't it? That's a proper game, a real game of football against very good opposition. When you're dominating the ball and playing the way we were playing, you know – that normally means you're playing well when the team's opposition start to kick you. And they have to take credit from that, you know – if they're getting the hump with how well we're doing and how well we're playing, then as long as we keep our discipline then it normally means we're playing well. So I'm pleased with that, they have to stand up to that. They did stand up to it and they were there for each other. And that's the main thing.

Four games into preseason, 19 goals scored, none conceded - you must be delighted?
Carlsberg! No, it's going really well but we have to cool our jets a little bit and just maintain our confidence but maintain our consistency with performance and the process. The process is what's important at thte moment – as long as I'm seeing the things we're working on the training pitch out here, I'm happy. I'm seeing those things. Yes, there's lots of work to be done. Of course, we'll get better as the season goes on, but so far, so good.

Two weeks now until the first competitive fixture. Please with progress?
Really pleased. I'm still nit-picking with some of our decision-making second half. We have to strive to be the best. We have to believe we're the best, but also strive to be the best. And we are doing, we're working so hard on the training pitch. I'm really pleased with their attitude, they're coming together as a group and day to day I'm seeing good improvement.

Think we have an inkling of a first-choice XI now. No sign of Baptiste or Greenidge though - injured?

Aye, we do - no news on those two - and we may find Evatt's trying to get full 90 minutes into some legs, even if he made a couple of late switches.
. 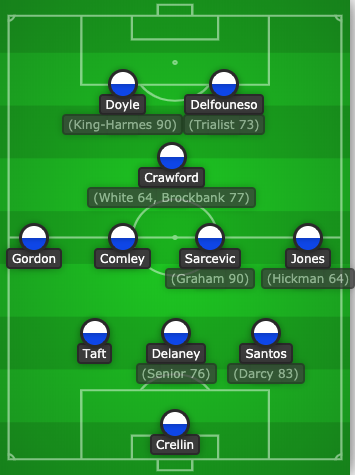 .
Iles says Brocky played in midfield for a few minutes when he came on, till Darcy replaced Reekz; I suspect not at 10, though, so maybe captain Sarce pushed forward once Crawford had gone off.
Words
Top

Interesting 11, that. Plenty of experience, but not an old squad. Looks like there's goals, pace and power in there too.

It has been a while since we've had a squad that looked the business. God knows what'll happen during the season, but we're in better shaped than I thought we would be a couple of months ago.
Top

Pics from yesterday, so (if you're owt like me) you can repeatedly say "Who's he?" and "I think that's Thingy."

Looks like Crewe will replace Blackburn as our final pre season friendly this Friday. Game to be played at the UniBol.

Playing Wigan today, possibly at Euxton, and we're going to put out a fringe team...

"Ian Evatt is expected to switch his side around for the Latics game, using some of the younger players who have been consigned to substitute appearances thus far in pre-season, along with some of the signings who have only recently joined the squad."

- although neither Crawford nor Gethin Jones have completed 90 minutes for us yet in pre-season.
Words
Top

Iles: "Wanderers have lost 5-1 in a pre-season friendly at Euxton. Delfouneso with the Bolton goal. Joe Garner scored a hat-trick for Wigan - and it was a very different Bolton team which started the game. Settled down in second half when senior players came on."

One down in five minutes to Callum McManaman, equalised when Mascoll crossed for Fonz, then Joe Garner scored for them. Half-time, replaced Crawf and Fonz with Darcy and King's Arms, quickly went 4-1 down as Garner finished the hat-trick. Six senior players on after 56, even thereafter but Wigan added another late on.
Words
Top

That Garner sounds useful, wonde did we can take advantage of Wigan’s financial position and snap him up ?

I like how they name check Adam in the report but have him listed as trialist on the team sheet!
Top 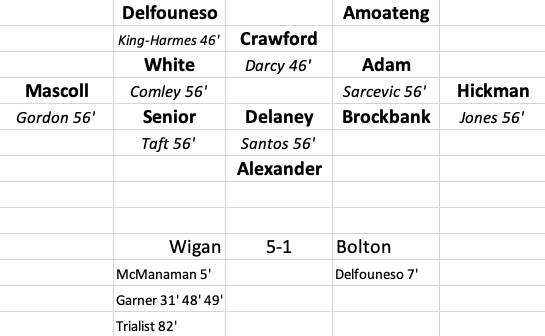 I don't think the result is as alarming as it seems on the surface. Sounds like the first half was reasonably competitive despite us only fielding three players I would expect to start come September (Delfouneso, Crawford and Delaney).

For the second half, two of the aforementioned were replaced by youngsters Darcy and King-Harmes, which is when Garner (a Championship standard striker) scored two in quick succession.

The cavalry (Santos, Taft, Gordon, Comley and Sarcevic) were then brought on and the game seemed to even out by the sounds of Iles' match report.

I should imagine this loss will be a lot more insightful to Evatt and co than the previous four wins.
Top

officer_dibble wrote: ↑
Tue Aug 25, 2020 3:12 pm
That Garner sounds useful, wonde did we can take advantage of Wigan’s financial position and snap him up ?

He's one of the strikers Parky wanted... as was Doyler...


We were poor, there’s no two ways about it. There were a number of people who said to me they needed more minutes and that they had been itching to play during pre-season, where we had set a high standard. And they didn’t do that. This has been a rude awakening. It is not acceptable, pre-season or otherwise.

I didn’t really want to have to use those [substitute] players, who had played the most minutes, but I didn’t feel there was a choice the way the game was going. It’s disappointing. To be honest, it is OK when you are chucking one or two of the younger players in there among the senior ones. It makes it easier. But when it’s eight, nine or 10 it is a bit more difficult, as we have seen there. Wigan played more or less a Championship team at the start of the match and it really showed at times but I was happier with the way we finished in the second half. 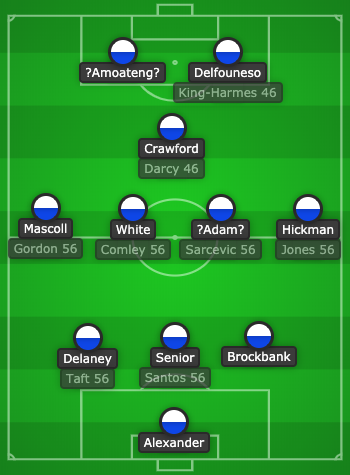 .
Note that when Evatt made six subs after 56 minutes, he changed his entire midfield and defence *except* Brockbank, rather than the more senior Delaney. True, the Irishman has played more minutes (45, 45, 45 & 76 = 211 compared to Brocky's 9, 45, 33 & 13 = 100), but it's perhaps interesting that Harry stayed on. He may have switched to the centre with Reekz flicking to the right, or equally maybe not: I do get the impression Evatt wants to keep Brocky around.

The updated pre-season game-minutes are:
. 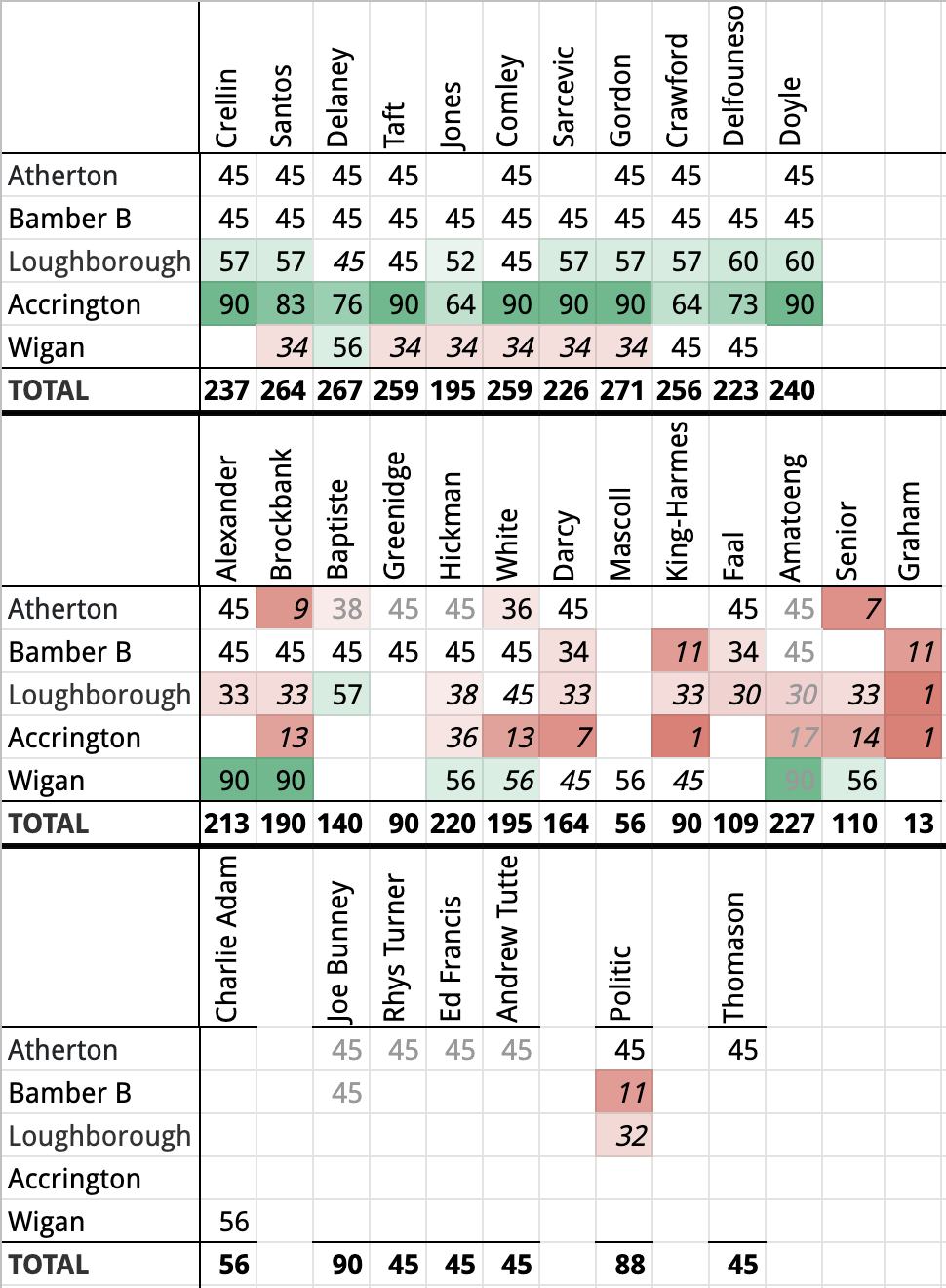 .
Still no sign of Greenidge or Baptiste today, which suggests they must now be doubts for the season start.
Words
Top

No sign of Faal again either. If he isn’t injured I am started to think he will be loaned out.
Top

I think a 5-1 dicking is a very useful result. Highlights a few shortcomings.
May the bridges I burn light your way
Top

The man echoes the same sentiments.
CODE: SELECT ALL
Top

"Talk around the club at the moment would suggest that nothing is close to being agreed" with Charlie Adam.
Words
Top

CODE: SELECT ALL
Interesting that Evatt has only named 7 subs. An indication that he’s using this as a dress rehearsal for the Bradford game?
Top
Post Reply
129 posts

Users browsing this forum: No registered users and 25 guests