It might seem obvious but Doyle is key to whether we get promotion this season, or more specifically the way in which Evatt uses him and sets the team up to provide service for him is key.

On Thursday the League Two twitter account posted a video compilation of all Eoin Doyle’s goals for Swindon this season just gone – it’s well worth a watch:
CODE: SELECT ALL
What amazed me was just how little he actually touched the ball. Because I have nothing better to do on a rainy Sunday afternoon, I decided to map out where he scored his goals and with how many touches. Of the 25 goals he scored last season, 23 of them were from open play. Of those 23, 18 were first time shots (78%), four goals involved two touches (17%) and there was one collector’s item of a four touch goal (4%). 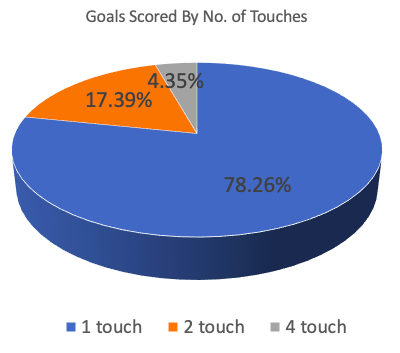 
Without compiling the stats for the percentage of one touch goals for strikers in the top four divisions, I’m willing to bet 78% is one of the highest rates in English football. (Out of curiosity I did the same for Danny Ings – only 38% of his open play goals this season were hit first time)

What’s also telling is where Doyle scored his goals. He was the definition of fox in the box, with the majority of his goals coming in that area between the penalty spot and six yard box. 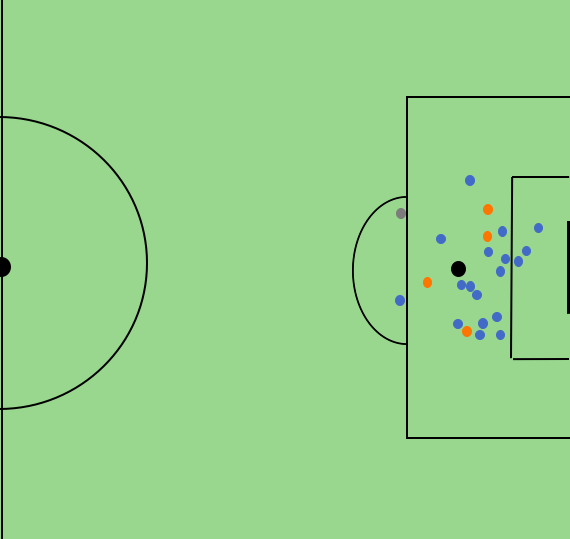 
Doyle had next to no involvement in Swindon build up play – he had the lowest number of total passes in the Swindon starting eleven, admittedly expected from a striker, but he was quite some way behind his strike partner Jerry Yates over the course of the season.

I was listening to the D3D4 football podcast earlier in which they mentioned Doyle and how Wellens had recently spoken about not even wanting him to move, just sit in the box and score etc so I dug out the full quote;

“Then it’s up to me as a coach to organise our players to get the ball in areas where where he can take advantage of that and do what he does best, which is finishing chances off. When I watched him for Bradford, he was asked to go up for headers and he’s chasing flick-ons from Clayton Donaldson or James Vaughan: that’s just not his game. I think we’ve got the best out of him, but I have to say the players behind him made chance after chance. He finished on 25 and I think if you asked him yourself, he could have easily been sitting on 45.”

We know Evatt likes his players to work hard and win the ball back quickly, however, hopefully Doyle is given a free pass to do what he did so well for Swindon - wait in the box most of the game for the quality service you’d expect Crawford et al to provide.

I must admit that I was a little unnerved about giving a 32 year old a three year contract on reportedly big wages, but if he fires us to promotion this season it will be well worth the gamble.
Top

Fascinating stuff, and very well researched – a pleasure to read.

The Wellens advice reminds me of when Bobby Robson took over at Newcastle and told Shearer to stop running - knowing Bob, the word may have been "gallivanting" - down the wings: "Just work the width of the penalty box, son, that's where you do the damage. Leave the running to others."

I suspect similar words were said to players like Kevin Phillips, among others, but we've forgotten because the prevalence of single-striker systems over the last couple of decades has demanded more "complete" players than the traditional box-fox: even Ruud van Nistelrooy, with his 150 goals in 219 MU games, was sold for the good of the team's system. (And it worked: having won three straight titles before he arrived, they only won one in five seasons with him, then three on the bounce when he left.)

If you have that right-place knack, you don't lose it, even if the limbs slow. Perhaps that was the "Moneyball" decision in giving Doyle three years: chances are he won't forget where the net is, and if others are doing the hard running - including his strike partner, a phrase that's fallen out of fashion - then he should be good for three years...
Words
Top

Cheers for that, was an interesting read. I’m thinking of a John Mcginlay comparison - though he sent some tasty crosses over as well

Still can’t wait for the first time I hear someone berate him for not closing a full back down mind.
Top

Cheers fellas, I appreciate the feedback.

A very interesting piece, Brommer - cheers. In the hope of boring those who've heard me tell this story before, I'll tell it again

In the early 90's a teammate of mine, in whichever pump and clog outfit I was playing for at the time, was the son of a senior Wanderers scout who one day decided to come along and watch us play. Over a post match pint a few of us started to quiz him regarding which/how many Premier League clubs were sniffing around the bang-on-form, scoring-for-fun Andy Walker. His answer? None. Not only that, he went on to say that Andy Walker would never play in the PL. After fielding a resounding response of "Bollocks" he kindly went on to explain. He pointed out how Walker never, or at best very rarely, finished with his first touch; he always took a controlling touch and finished with his second, whereas a top striker finishes with his first touch. If you look back at the old vids you'll see that this is actually perfectly true - Walker controlled the ball whilst picking his spot (albeit expertly).
As a result it's something, probably the first thing I've looked for since in any striker.
I'm actually quite excited now to see how Doyle gets on

^^ I'd be equally as happy if he picked the ball up on the half-way, took 10 touches to beat 4 defenders and put it in the onion bag twice a game.

I wouldn't judge him too harshly for that.
Top

It interests me that his second-tier goalscoring record is so poor in comparison to his record at tiers three and four. The step up from three to two is the biggest in the pyramid in my opinion, so it could just be that gulf in quality which explains it, but his highlight reel suggests that he has the raw materials required to succeed at a higher level - anticipation, positioning, technique, ability to finish with his first touch, etc.
Top

I wouldn't judge him too harshly for that.

Well, I could probably get used to it, I suppose.

nicholaldo wrote: ↑
Tue Aug 18, 2020 10:41 pm
It interests me that his second-tier goalscoring record is so poor in comparison to his record at tiers three and four. The step up from three to two is the biggest in the pyramid in my opinion, so it could just be that gulf in quality which explains it, but his highlight reel suggests that he has the raw materials required to succeed at a higher level - anticipation, positioning, technique, ability to finish with his first touch, etc.

Maybe he hasn’t been played to his strengths, and in relatively poor teams? IDK his background really. But players can often get caught between levels - like Dwight Gayle and, before him, Jordan Rhodes.
Words
Top

Further to the above thought, here’s an interesting piece on 20-goal strikers from new blogger The Burnden Way, who’s well worth following.

Users browsing this forum: No registered users and 11 guests