Riviman wrote: ↑
Tue Sep 08, 2020 8:56 pm
Doyle should/could have had a couple, defence very worrying, have we no other left back/wing back other than Gordon?

Gordon played well for me, he’s a wing back...The back three though are awful.
Top

Agreed
I think we have to start with Baptiste and Delaney, and I think Santos is the only right footer we have.

Comley won a lot more in midfield, so it’s the midfield 3 from Saturday for me unless you swap Crawford in for Sarcevic (who was better second half but I bet Crawford was more useful). Can’t see the skipper being dropped mind.
Top

We've certainly bigger concerns than Gordon IMO. Thought Hickman did pretty well, Crawford too. White was good. Doyle was more involved and probably should have grabbed one. Miller was good.

Defence. Give you collective heads a shake.
Top

Much better second half, but still shocking in the back three. Headline writes itself - Mandron Against Boys.

Sarcevic has been really poor these first two games, for me. Wasteful with the ball and unable to cover the ground. For all his giving the ball away against Bradford, we look a better unit with Comley on the park. He covers ground and breaks up play in a way we need. Crawford is clearly our most creative player.

Positives are there to be had. We created a lot more tonight, especially for Doyle. Gordon picked up second half and looked much more confident - still doesn't fancy himself to make a pass, though. Hickman's delivery was superb. Great Miller cameo.

I think we can all see that how we do this season is going to rest on whether Evatt can sort the defenders out. This powder puff stuff will get us battered in L2. The sloppy play we can work through, but we need to see evidence of some blood and thunder at the back. I don't buy the "it was only a mickey mouse game" thing. Some of those lads came out at half time obviously up for it and some didn't.

Side note: Sarcevic, in injury time, with his back to the ball in the box walking away from the lad trying to find him from a throw in. Not a clue what's going on and then doesn't bother making a run when play resumes. Feck knows what that is from the captain, but I don't want to see it again.
Top

Curate's egg of a performance - although utterly shit hotel WiFi dropping out meant I must have only seen 40% of it, so take these comments with an even bigger shovelful of salt than usual.

Hickman was impressive – so much so that I wonder whether his early hook was to protect him for Saturday? Nothing against Jones, who also looked decent, but the boy's got a good cross on him and the impetuous confidence of youth.

Same can't be said on the other side, where Gordon continues to look uncertain. Pity we couldn't see Mascoll tonight - and obviously a pity that Flash hasn't kicked on since his impressive early displays (against much weaker teams).

Of the back three, Delaney had the best game, albeit not in exactly a Holland 74 way - just simple defending, the highlight being the clearance off the line. Will be interesting to see if Evatt keeps him in or reverts to Baptiste.

Taft looks prone to errors, as notably Santos did. They have to be coached out or we're going to keep conceding.

Brockbank: I love the lad but he's either trying too hard or he's just not cut out for this system. Maybe it's unfair to judge him on one game in a misfiring team. Let's see what Evatt does. If the team needs a decent right-footed competition/upgrade for Santos, he might have to be sacrificed.

White was tidy again, and protected for Saturday with an earlyish subbing. His replacement Comley looked to have a better game and that's a good thing. He's a tidy, unfussy player and we might need those.

Sarcevic hasn't kicked into gear yet, bar a few flashes.

Crawford was at the middle of most of the good we did, although he still fades in and out of games.

Doyle missed two sitters by his standards, although he doesn't seem worried by it. Needs a goal.

Fonz worked hard and deserved a rest but Miller made a difference when he came on, which is good to see.

Commentators are hopeless - who's Shaun Murphy? Why did he keep calling Brockbank Hickman? Why is Gary Henshaw's mic technique so bad?
Words
Top

Henshaw suggested he thought Sarcevic was carrying a pound or two which was interesting. He was still running at the end but he certainly didn’t influence the game like he should - again.

Forest Green Rovers Saturday. I’m hopeful they will be a bit easier than the last two games. Big game though - another loss and this is not looking good.
Top

Defence. Give you collective heads a shake.

Pretty much exactly my views. Sarcevic has been disappointing so far. Back three - I’m not sure I’d be giving them any benefit of any doubt. Basics wrong. Lack of aggression. Slow to react. Mistake prone. Painful.
Top

I think DSB's post is pretty much on it.

Gordon obviously has raw ability, but I think it's going to take time for him to get comfortable passing the ball. He is very one-footed and when he receives it he is constantly looking to shift his body position to let him pass with his left. If we can get him using his right more I think we'll see him relax when he's on the ball and he'll be able to get rid of it before the pressure is on. It's a fractions thing, but it'll make a big difference to him on that flank. When he is on his left and has time there's plenty to like.

It's a big positive that we have reacted to Evatt's half time words in two games now. Not good that we've need to, but still.
Top

Problem with the back three, is we've seen 5 of them in two games and I'm not counting 1 shoo in yet.

Sarcevic, I was trying to watch a bit closer than I did Saturday. For me he tries to play every ball back or sideways, with very little forward view. He's not struck me as better than bang average, but as with Gordon, bigger problems in the world.
Top

officer_dibble wrote: ↑
Tue Sep 08, 2020 9:20 pm
Forest Green Rovers Saturday. I’m hopeful they will be a bit easier than the last two games. Big game though - another loss and this is not looking good.

One of the best squads in the division. The big positive is that there have been big issues with the manager and they finished the season really badly. Rumours were that a number of key players wanted him gone and if that's true we could be playing them at the right time.

Agree that if we lose we will have issues for a few games.
Top

Is Jones an out and out wing back or has he played at centre half? I think Santos starts on that side whatever Saturday mind.
Top

Can he give his HT talk before kick off on Saturday?

Worthy4England wrote: ↑
Tue Sep 08, 2020 9:33 pm
Sarcevic, I was trying to watch a bit closer than I did Saturday. For me he tries to play every ball back or sideways, with very little forward view. He's not struck me as better than bang average, but as with Gordon, bigger problems in the world.

Was worse than that, for me. It may just be because we lost and I am always annoyed after a loss, but that was never a captain's display in a million years. He didn't make basic 10 yard runs when the defenders were being pressed and he was happy to let his man make runs off him when they broke on us. Just yelled at White, who was already making, and pointed that he should pick up his lad too.

I am sure there's a player there. He can shift with the ball, his body positioning is excellent and he makes decent forward runs...but if he can't be arsed helping out the young lads when they're under pressure he's no business with the armband. Probably just a blip from him, but I was properly annoyed.
Top

The defensive calamity extends beyond the three centre-backs in my opinion. Rarely have I seen us turned inside out so often and with such ease.

We have to drastically improve our shape and structure or accept we can't push players forward as readily as we do without dominating possession.
Top

I agree on Brockbank by the way. He could probably do a job at right-back, but we don't play with full-backs.
Top

How good was Mikael Mandron? Or did our back 3 make him look extra special? He certainly looked more Championship level on that performance and the kind of money ball signing we ought to aspire to.

Defensively we were awful but that was as much a collective thing, as well as the 3 centre backs all seemingly not knowing their jobs.

Crellin, White, Hickman and Miller were all bright spots for me. Lots more work on the training ground needed though.
"Get your feet off the furniture you Oxbridge tw*t. You're not on a feckin punt now you know"
Top

I'll say this, if a neutral had watched that 2nd half they'd have been extremely entertained.

We had enough to win it. Yer the defence was ropey but we've been given turgid football for the past god knows how many years trying to defend a 1-0 lead. This team gels and we're in for one fecking ride.

Look at it this way, the defence can only get better.

Harry Genshaw wrote: ↑
Tue Sep 08, 2020 9:53 pm
How good was Mikael Mandron? Or did our back 3 make him look extra special? He certainly looked more Championship level on that performance and the kind of money ball signing we ought to aspire to.

Always been a good player in the build up. Isn't at a higher level because he doesn't score enough. Has been at Sunderland and Wigan and not cut it. Might be one of those who comes into his own now his body is mature and he's carrying more power.

Would agree totally with what DJBlu said about a good second half for the neutral. Almost as good as the first half was bad.
Top

I'd have ran with 'Shagged us Taft', myself.

Publish and be damned. 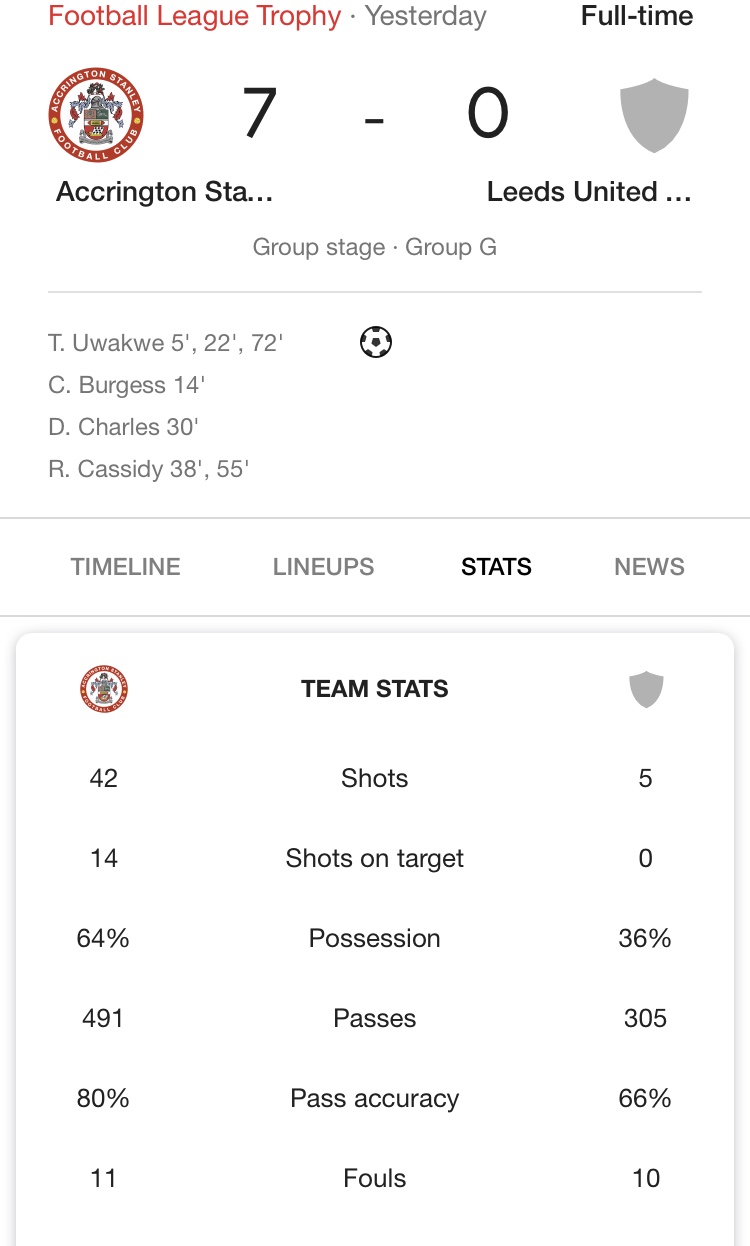 Users browsing this forum: No registered users and 28 guests