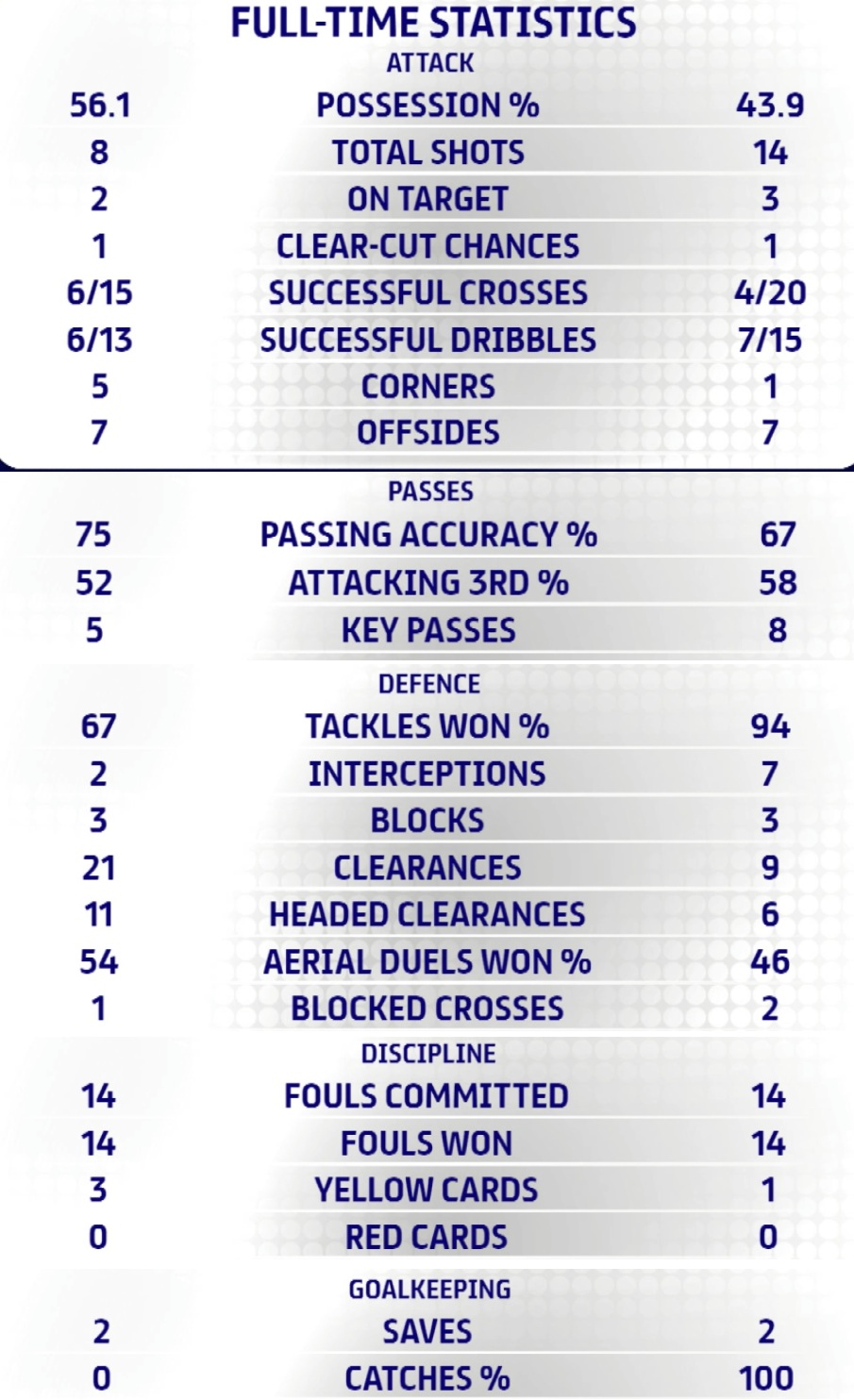 .
We edged possession because FGR let us have it after their goal - previously it was fairly 50/50 (or "51/50" as one one-screen graphic memorably claimed).

A lot of FGR's shots were shit. The most worrying thing may be that they weren't a particularly good team.

6/15 crosses is not actually a bad ratio - crosses often fail, as FGR found out. But it could still be better, if we can harness Hickman's Beckham-lite crossing style.

Corner count of 5 to 1 means nowt if we're going to keep wasting them. Offside off a corner - how do you even manage that once, let alone repeatedly?

Note how our pass completion goes from 75% overall to just 52% in the final third, ie where it hurts. For comparison, FGR's barely dipped from 67% to 58%. This bears out the Mar theory that we suddenly lost our heads four passes in and made the wrong choice.

The tackle-winning percentages tell a tale – we won 67% of our attempts, they won 94% of theirs. Again, that could be about decision-making or just ability.
Words
Top

nicholaldo wrote: ↑
Sat Sep 12, 2020 7:42 pm
I don't think it helps Gordon that our lack of incisiveness and urgency in getting up the pitch means the final third often ends up being quite congested.

Much like it didn't help Doyle that we kept giving him the ball when he was surrounded by 5 players and then everyone ran away from him and basically said "off you go, lad."
Top

BWFC_Insane wrote: ↑
Sat Sep 12, 2020 6:42 pm
Crellin - 7 did nothing wrong
Santos - 1 calamity waiting to happen and oh god it so often does
Baptiste - 3 did his best but that wasn’t good enough
Greenidge - 2 did not look quick to me
White - 3 did his best not very good
Comley - 2 awful on the ball
Sarcevic - 1 what does he do?
Jones - 1 never a wing back in a million years
Gordon - 2 he’s better than Jones. That’s it.
Doyle - 1 he’s had three sitters in the last two games and missed them all. Offers nothing else.
Delfouneso - 3 - Tries hard.

I think those match ratings are perfectly fair. I thought we’d at least look a team that rolled it’s sleeves up for each other. I’d say we look like a group who hate each other.

Well, if 5 out of 10 was the point at which you've won your personal battle against your opposite, those scores might not be a way off. I wouldn't have scored them exactly like BWFCi though.

If you're giving a guy a 1 out of 10 he'd better have at least wiped his arse with the shirt and scored a couple of own goals.

I do like the fact that Doyle's rating includes chances he missed in other games, though. That was quality. It's like arguing with your wife and she brings up that you left the fridge open last Thursday.
Top

officer_dibble wrote: ↑
Sat Sep 12, 2020 5:39 pm
That Gordon is a non league player now. I know he’s not the biggest problem but he’s a problem. We can’t carry non league players if we want to win games.

He isn't the biggest problem, but a lack of penetration from our wide men is a significant issue. Gordon seems terrified to take people on, while Jones is more of a right-back. That means that we get little penetration down either side, which is a key part of the wingback system. Meanwhile the (central) midfielders often aren't showing for the ball, so we're not turning defence into attack. Instead, the wide centre-backs are asked to carry the ball – which is fine and all part of the expansive system, but again they lack confidence so they're reverting to punting it forward. It seems to me to be a systemic lack of confidence in themselves and their team-mates.

Obviously Evatt sees them in training etc and so on, but right now it feels like Hickman offers more penetration while Mascoll must be worth a look on the other side, if only to give Gordon a break.

I think the wing back swap is an easy way to change things whilst continuing to try to coach his system he's obviously wedded to so should be tried immediately. Gordon has been dire, Jones less so but still not doing the job asked of him. Looks like winger and and full back, neither of them a wingback.
Feel a bit sorry for Jones, who has done some decent defensive work whole offering little going forward. This would've been ok if Gordon was bombing down his wing and using his pace etc, but he's done nothing good at either end.
...
Top

The bwfc circus carries on!

I’ve looked and I can’t see that he has hot dogs abuse but I could be wrong. If people are losing it 1 game in they want their bumps feeling, BUT I have no idea why players at this level get involved on twitter - it can only end in tears!
Top

I think a few have been accusing him of abusing the hot dogs, yeah.
Top

I think a few have been accusing him of abusing the hot dogs, yeah.

does look a bit Sunday league

Seriously though, fans abusing a new player one game into the league season. I don't know if we have more or fewer dickheads than the average club, but we do have a lot.

Evatt has reacted by talking about the losing mentality of the club it seems, despite there being no fans there and a new team entirely of his making. All for giving him a chance but yes talking bollocks there.
Managed to slip in something about him being a winner (again, yawn).

Oh and this ... "I got a letter off a supporter saying I need to play 4-4-2 and smash it down the channels... we have to be stronger mentally than that"
Come on, own up, who was it?

Honestly, Sarcevic has always looked like a chunky guy - I think it's just his body shape. KD used to get called a fat bastard by opposition fans (and some of our own knobheads), but he wasn't.

Ultimately he's BWFC captain and he's going to get battered on social media from time to time. Unfortunately that's par for the course.

I was bloody annoyed with him today as well, but there are limits. Some people get mad and like to be billy big bollocks on Twitter.
Top

Letter writing is serious business! He must've got the letter prior to today's game or he's blagging it to support his philosophy. I suspect it's like having a fax in your pocket.
Top

My point, in a nutshell. Depends where you set your own bar to start off with. On the Worthyrating system, with the exception of Crellin who had another solid game, I doubt any of them would get more than 5.
Top

Well if he thinks he got hot dogs abuse after a home defeat against the veggies, just wait until no wins in 4 and a battering against a team that were non-league a couple of months ago! This is getting worse before it gets better! Probably a good thing they didn’t have 10000 on booing them yesterday at full time.
Top

I don’t see how IE can expect to play an expansive, attacking style of football with so few ball players in the side. At a minimum I’d want Crawford to start the next game, but Tutte also looked a big upgrade on Comley and I think we need another more creative player through the door as well.

I think there’s also a strong argument for swapping both wing backs out, as neither of the incumbents look suited to the role.

Santos had a few positive moments when he carried the ball forwards, but mostly looked a defensive liability. Greenidge was atrocious and Baptiste brought none of the level-headedness you’d expect from a player with his experience. If Taft and Delaney have been worse than yesterday’s starters then we’re in big trouble at the back.
Top

How long did Keith Hill get before everyone jumped down his throat?

Give it time.
Top


We seem to have a disproportionately large number on social media, and, to be honest, I think it's at the stage now that it's hurting us as a club.
Top

I agree entirely with your sentiment, and what's happened to Sarcevic is out of order but let's not reinvent history where Hill's concerned. All told, he got a pretty easy ride during his tenure.
"Get your feet off the furniture you Oxbridge tw*t. You're not on a feckin punt now you know"
Top

I agree entirely with your sentiment, and what's happened to Sarcevic is out of order but let's not reinvent history where Hill's concerned. All told, he got a pretty easy ride during his tenure.

He was also moaning about it before it happened!
...
Top

Barrow's poor start last season is a glimmer of hope, sounds like it clicked all of a sudden and they went on a brilliant run.
...
Top

LeverEnd wrote: ↑
Sun Sep 13, 2020 9:05 am
Barrow's poor start last season is a glimmer of hope, sounds like it clicked all of a sudden and they went on a brilliant run.

I think that's the hope many of us are hanging onto. It is hard though, to imagine that group yesterday going on a long unbeaten run.
"Get your feet off the furniture you Oxbridge tw*t. You're not on a feckin punt now you know"
Top
Post Reply
200 posts

Users browsing this forum: No registered users and 11 guests