2003-04 was quite the season. Having just about avoided relegation in the first two Premier League seasons under Sam Allardyce, Bolton – bolstered by summer signings Stelios, Ivan Campo, Kevin Davies, Emerson Thome, Mario Jardel and Ricardo Vaz Te - finished 8th in the top flight, a highest finish since the 1950s. Meanwhile, Crawley Town were being promoted to the Conference, their own personal best thus far.

The two clubs got considerably closer a decade ago. In 2011 Crawley reached the Football League, and were immediately promoted again while Bolton lost top-flight status. That August, the two clubs were drawn together for a League Cup tie at the Broadfield Stadium. Owen Coyle changed his style slightly by introducing a 4-5-1 featuring talented tyro Josh Vela, although the kid was soon injured and replaced. Bolton went in front through Benik Afobe, but as they game wore on they lost control of the midfield – so Coyle replaced Mark Davies with Kevin Davies and Crawley capitalised to come from behind and win 2-1.

Six weeks later Coyle was gone but Bolton continued to drift downward, ad they weren’t alone. Crawley fell to the fourth tier in 2015, a year before Bolton dropped into the third for the first time in a generation, and since then the Sussex side have finished forgettably in 20th, 19th, 14th, 19th and 13th.

They’ve started this season reasonably though, currently sitting ninth in a congested top half after winning 8, drawing 7 and losing 6. They’re 7 unbeaten in the league (W3 D4) and are usually good for a goal at either end: they haven’t kept a league clean sheet in 12 games but have scored in 14 of the last 16.

For all the changes, Bolton are still suffering somewhat under a very Parkinsonian habit of “First scorer wins”. The team deserves credit for battling back from 3-0 down in a Carlisle typhoon, but equally they will be punished again if they repeat the defensive dimness shown in that last game.

Peter Kioso is suspended so Evatt will have to shuffle his pack again: in the 25 games thus far he’s chosen 20 different starting XIs. Some would deem that selection by tombola, but few would claim we’re the finished article. With January here, the XI is set to change again, and hopefully for the better.
Words
Top

Same team as I said he should play for Morecambe for me! Would like brockbank in for Baptiste and Hickman at wing back.
Top

You beat me to it DSB. I was just about to post "The Crawleys are creeping" ..two draws and three wins in the last five. A win today would start our New Year off very nicely. What we'd give for a Kevin Davies right now.
Si Deus pro nobis, quis contra nos?
Top

We have two possible Bolton teams that Evatt can put out, ostensibly with the same 11 players. One gets bullied, switches off and doesn't win 1v1 battles. The other scores three away from home. He can put both teams out in the same match. I hope he puts out the latter.
Top

Good luck getting a GP appointment at the moment

I wouldn’t fancy us keeping a clean sheet against me these. In Max Watters they have the form striker in the division (13 goals in 15 starts) who was signed for free in October and is now apparently being watched by teams further up the pyramid, with a fee of £2m being mooted.

With no recognised wing backs available (bar Hickman who doesn’t seem to be in the reckoning anymore) on either side today might be a day to move to a flat back four (Jones, Delaney, Santos, Brockbank), but Evatt doesn’t seem particularly inclined to start with anything other than his favoured three at the back, so I guess we’ll see Jones at LWB and Brockbank at RWB.

Further forward the only question mark would be who starts in the 10 role, with Sarce, Crawford, Isgrove, but unfortunately not Darcy in contention.

It’s very difficult to predict our results these days, but I’ll plump for an entertaining 2-2.
Top

Good luck getting a GP appointment at the moment

The_Gun wrote: ↑
Sat Jan 02, 2021 1:24 pm
Further forward the only question mark would be who starts in the 10 role, with Sarce, Crawford, Isgrove, but unfortunately not Darcy in contention.

We've been moving away from the 10. Playing one (Tutte, or Thomason) behind two (at Carlisle, Sarce and Tomo). Seems more sensible and solid to me – but if the wingbacks stay home we can look awfully stilted.
Words
Top 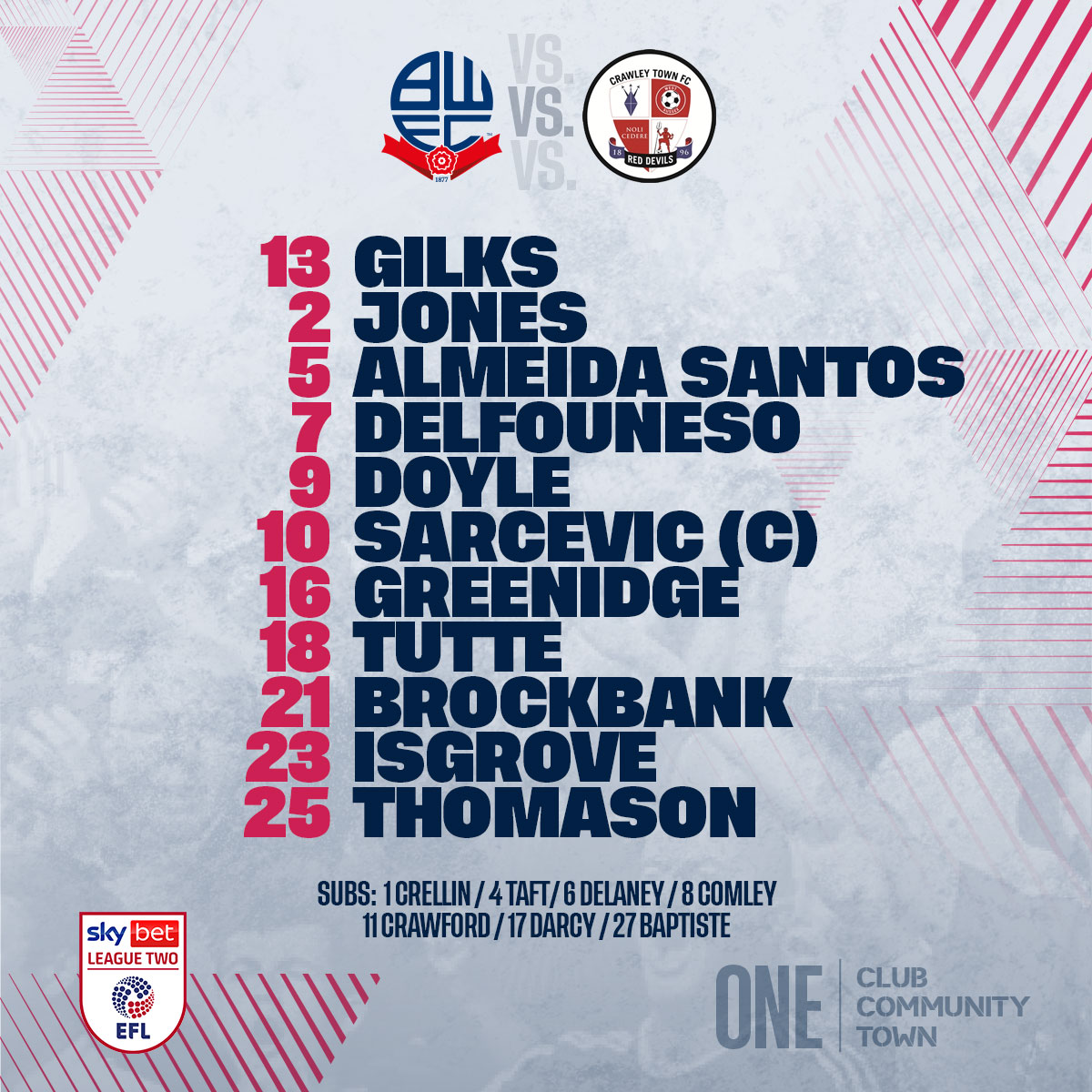 What do we reckon that is? Isgrove at RWB or a flat back 4. Excited for the chaos value of Santos and Greenidge

In a world that has decided
That it's going to lose its mind
Be more kind, my friends, try to be more kind.
Top

We'll have to wait until we're told by someone in the know. I'm certain if we lose a goal it'll become apparent.
Top

Considering Isgrove played at wing-back in our last match, I can only assume it's the regular 3-5-2.
Top

For what it's worth; I live in Farnworth, about 8 miles from the Unibol and it's absolutely peeling down with snow right now here..
Si Deus pro nobis, quis contra nos?
Top

For the record, Baptiste has started the last 15 "first-team" (non-FLT) games, Delaney the last 18. So yeah, big change.
Words
Top

Big calls! Greenidge hasn’t convinced me at all he’s a footballer yet but I suspect he’s playing the position he was signed for today. Delaney Baptiste and Taft on the bench!
Top

Prior to today's game, Delaney and Baptiste have played the fourth- and seventh-most minutes for Evatt's Bolton.