As soon as the players got off the team bus at the Macron, our players were straight into preparation for this important game at the start of a new year. Hull sit two points, and a superior goal difference above us, meaning we will go above them if we win, and up to at least 20th.

Hull have had a turbulent few years. Relegated from the Prem in 2009/10, Promoted in 2012/13, FA Cup finalists and qualifiers for Europe in 2013/14, 1st ever UEFA cup campaign and relegated in 2014/15, promoted again in 2015/16, relegated again 2016/17, and now fighting relegation to L1 in 2017/18. Off the pitch, the Allam family initially bankrolled the club to punch above their weight, but since a failed bid to change the club name from "Hull City AFC" to "Hull City Tigers" and a failed bid win planning permission to develop the area around the ground and the upgrade the ground itself, things have turned sour. The family pledged not to "put a penny more into the club" and seemingly have not only held to that promise but also have taken money out of the club. They have struggled to put field 18 players for last two years at the end of the summer transfer window, as they have sold players and been slow to add players leaving them frantically trying to put a squad together on the final days of the TW. This season Russian, ex CSKA Moskow manager Leonid Slutsky arrived to try and turn fortunes around, but has already been sacked, leaving Nigel Adkins the job of scrambling to safety. After a good win over Brentford in his first game, two away defeats have been followed by two home draws, including a 2-2 against Fulham yesterday, having led 2-0.

For us, Parky pulled off a master stroke to beat Sheffield United yesterday, managing to change both the team and formation to gain a surprising 1-0 win. In a perfect world, he would be rewarded with some key players fresh to beat Hull too. Who knows how we will pull up against Hull, with midifelders Henry and Pratley likely to be asked to play four games in nine days at the ages of 35 and 32 respectively, and injury doubts over Ameobi, Noone and Taylor. Madine too has played every game this season and completed 90mins at Bramall Lane. But Hull also have similar problems with few changes in their line ups over this intensive run of games. Therefore I predict 2-0 to us. COYW.
Top

I have a secial reason for wanting to beat Hull. An ex workmate of mine, when they first got promoted to the Prem, said quite seriously, "We should be fine; all we have to do is beat the easy teams like Bolton and we'll do okay." When they started sliding I was right in there with a reminder. A win tomorrow would see us leap-frog them. Wouldn't that be a cracking start to er, next year...

I don't like Hull because it isn't. It's Kingston ffs. It's like calling Sheffield, Don or London, Thames.

That's not a leopard!
頑張ってください
Top

The concertina of the drop-dodgers means this isn’t a must-win, but it’s a should-win-if-we-mean-it-and-don’t-want-to-have-to-do-it-the-hard-way. Another six-pointer, like Burton was; just as that loss more than negates the impressive win over Cardiff, so would a loss to Hull lessen the beneficial impact of the welcome win at Bramall Lane.

Put another way: thanks to the Burton loss, we started the heavy Christmas schedule two points below the dots. Now it’s just goal difference, and with us facing a winnable home game while Sunderland host Barnsley, we have a very good chance of getting our heads above water. Hopefully Parky will be using the Burton game as fuel for the desire to do so.
Words
Top

Hull in a handcart. A disaster. Wanderers to 4uck up a vital game once again. 0-2. Happy New Year.
May the bridges I burn light your way
Top

Sure not a time for talking, but we have to forget the "Tigers" bit and get out there and maul em. Forget revenge, history and all else except winning, and we can wish them a Happy New Year as they get back on the coach. No sitting back in our half unless we're four up. Just get out there and do it. Those are your instructions.

That's exactly whereI'm at today. Prove us wrong lads. Pleeease
"Get your feet off the furniture you Oxbridge tw*t. You're not on a feckin punt now you know"
Top 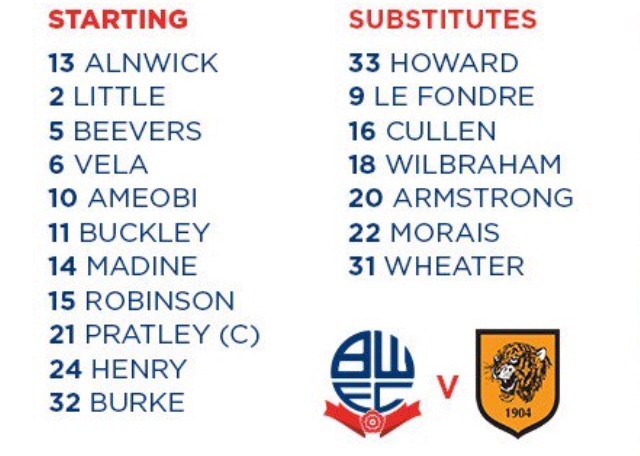 It’s back to plan A. Interesting that Wheater drops to the bench while Burke remains. (Also, in minor news, Howard replaces young Turner on the bench)

It’s back to plan A. Interesting that Wheater drops to the bench while Burke remains. (Also, in minor news, Howard replaces young Turner on the bench)

Having seen that, not overly confident, nor overly worried. But, we do neeeeeed to win.
That's not a leopard!
頑張ってください
Top

Hope Wheater on the bench is the right move. The rest looks pretty good; we'll have to see. Anyway, time for a COME ON YOU WHITES....

Had my studs checked, deep breathing on the spot, mic men in position, rain has apparently stopped and....away we go....oh, and....the feed packs up for a minute.....Some mither about this and that and.....we're playing music (is that music?) This is not good chaps, come on...
Si Deus pro nobis, quis contra nos?
Top

What a time to have technical faults, just as thr ref's blowing the whiste and, ah, we're away....
No goals in the first two minutes and the visitors are having a sniff at our end but we get a free kick. Chat. chat and more chat, then they get a corner via a Burke bloc.. And....they get another....and..in and...we get a hrow.
Si Deus pro nobis, quis contra nos?
Top

We haven't figured much yet, but have a free kick. Mic man's away already with world-wide scores, then we have a touch of passing, then it ends back with Ben. A wallop and cleared, but Robbo and Henry get involved. Forward it goes and, they get a free kick on halfway. All chat so far and noit much commentary lads? They have it again, but we get the throw via Burke. What's with all these scores? Robbo, Buckley and.....they get the throw. Buckley not getting the poisitives so far, but we now have a free kick from deep. Sammi has a spot of possession as the rain falls (apparently) mic lads have a chat. Robbo, Buckley..cleared...Dawson, then Vela, then back to them.....and another corenr for them. Henry is down and....?? He's back up but it looks like Henry is off for Cullen. Not good.
Si Deus pro nobis, quis contra nos?
Top

Cullen getting good words and we resume. We get in a scramble then Buckley sails it badly forth. We go again....Madine gets a free kick, or is it Prats? Anyway, we have a set piece....and Madine is offside. Preston and Boro drawing 1-1. We're not sounding too sharp yet as...we go to Bury........then.....mither, then....We have a free kick forward and.....in and....Cullen, Madine shoots and is blocked. We have a corner,......and...they clear and break.
Si Deus pro nobis, quis contra nos?
Top

Chat about food, then the visitors sally and win a corner. And......it hits a Huller and is cleared. Little now, and a throw to them. Some more negativity from mic man and....sammi tries, but it's a throw them...and.....Buckley, Robbo and....we get another corner...And now.....in and....Vela and.....we get another corner......and....Vela again and...Madine's header is off the mark and they clear.
Si Deus pro nobis, quis contra nos?
Top

Users browsing this forum: No registered users and 7 guests