Simple. Gary Madine will, in all likelihood be playing against us for Cardiff City this evening.
If his current teammates have quickly learned how to play to his strengths then he might be a handful. Might be - but then he'll be up against defenders who've played aginst him in training every day for the past two years or so.
And if they haven't learned how to play to his strengths then Madine will simply revert to being the useless lump we came to love and loathe for most of his time with us.

Nah, he'll play a blinder against us before becoming shite again and wander around the lower leagues. It's how it works for the vast majority of players that leave us...
Top


Ha. Brilliant. The "I told you so" after two games.You might want to wait till the end of the season before crowing. Or at least till after the next three games, two of which are make or break.
We've absolutely grafted our knackers off in two games, (apart from the first 20 on Saturday) and defended brilliantly. And scored two absolute wonder goals.

I still question, how repeatable is that? We've no reliable way of creating chances against teams now. We're very reliant on Sammy who runs out of energy as the game goes on and ultimately is very inconsistent. After that we can't throw crosses in, have no target to play off and if someone doesn't score an individual goal then our only hope seems to be a set piece. And we're not scoring from set pieces. In the last ten minutes on Saturday the ball came back time and time again. In reality on another day Fulham would and should have scored in that period. We're on the finest of fine margins.

The time to judge this wondrous new world will be QPR away, Sunderland at home. Two teams in and around us, who we'll have to break down. Games where you need a way of creating and taking a chance or two. IMO they will be very different sorts of games to what we've just faced. Huge credit to Parky for finding ways to take valuable points in those games. But the test is going to be beating QPR and Sunderland. I'm unconvinced as yet that what we've got has the ability to do it. Spirit we've got in bucketloads. But when the emphasis is on us to get at teams I wonder how we'll go.

As Pru says the grind will be the key. And I think its a huge question mark still.

So, just what exactly are you saying Insaney? Do you want us to win/survive or would you rather be negative so you can say "I told you so" if we fail? Do you really think that parting with one player, even if he were combination of Messi, Neymar and Ronaldo would be the end of our world? We've existed with patchwork teams before that were less skilled than the one we now have. We spent a full season with a striker at left back, have seen really decent, even exceptional players never come back from injury and struggled so much that we almost went out of business a few weeks ago. If ever there was a time for supporting and showing some positivity, it's now. This "wonderous new world" is just a snide comment of your imagination because nobody is claiming any such thing at all. We'd have exactly the same situation and targets whoever plays for us, and Gary Madine (because this is what you're all about, isn't it?) woudn't change a thing if the rest of the lads didn't play their bollox off. It's like this, because this is who, what and where we are as a club. Most of us just hope for the best, something like about a dozen other teams in this league. Football's all about money now (here's where you say "No shxt Sherlock!"), and everybody and his dog knows we have none. That's our long-term problem, not just selling a player to pay the bills so we can carry on for a while. Shxt Creek looks about as wide as the Bosphorous right now and our canoe is no luxury liner. We just keep the faith and keep hoping.

Just don't forget your wonder boy rattled in a transfer request at the first smell of a pay rise.( fact, by his own admission) He wasn't exactly sure what shirt he'd be wearing the following week except it certainly wouldn't be a Bolton one.

Look at the comment I replied to. A self described "sneer".

Of course I'd love us to stay up. If you think I waste all my time going to games, thinking about the club and posting nonsense on here because I actively want us to fail then you must be mad.

However, its fine for me to think (with a lot of evidence to back up said thoughts) we're weaker without him. We may still stay up, the team spirit seems as good as ever, and christ we may even play some nice football doing so. But the proof of the pudding is yet to come. We'll see.

As for the transfer request, I don't for one minute believe he wouldn't have, if asked got his head down and grafted here. Of course he wanted to go to a top 4 side and double his salary. I can't blame him. The club sold him for decent money (I still think on the low side comparatively) but that money will not be invested in the team. Its another short term fix to pay bills because our owner won't. Do you want me to be happy about that?
Top

twilight wrote: ↑
Mon Feb 12, 2018 9:37 pm
Have we done well away from home with Madine in the side this season? If so I must have missed those games. We were still near the bottom with him, so it's not as if it's earth shatteringly bad that we have lost him, is it?


Away league table, as-is. (We haven't played away since Brentford on Jan 20th.) 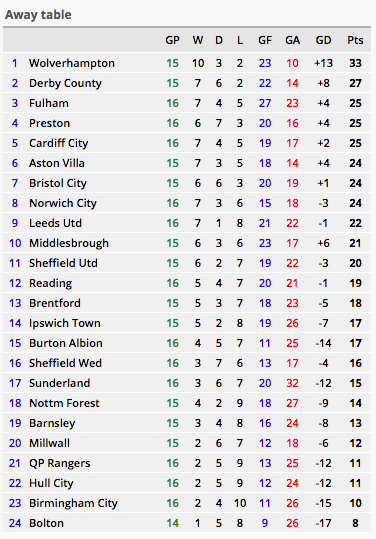 
Second-tier away results while Madine was at Bolton: 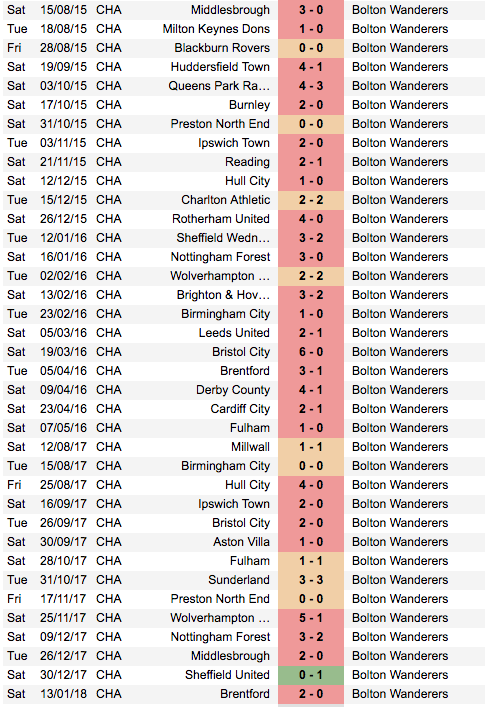