We are back in West London for the third time this season on Saturday, as we take on QPR at Loftus Road.

QPR have had a turbulent last few years, both on and off the pitch, marked by a series of wealthy owners meaning the club has pursued the benefactor model to try and achieve success. Formula 1's Falvio Briatore and Bernie Ecclestone have come and gone, and now Air Asia's Tony Fernandes is the majority shareholder, with the world's 56th richest person (at £20bn) Lakshmi Mittal still on the board as a minority shareholding. Fernandes, a mere pauper at an estimated worth of £650m, originally ploughed in £50m in 2012/13 but couldn't save the club from relegation from the Prem, and though they were promoted again in 2013/14, they were relegated straight away in 2014/15. Fernandes delcared a disliking for the football business declaring that he had been "ripped off" and suggesting agents would "sell their grandmother". QPR were also amongst the first victims of the Financial Fair Play regulations and are currently appealing a £40m fine. All of this has meant the club have abandoned their big spending ways, at least for the time being, and are currently feeling the pinch as they try to get closer to living within their means. Manager Ian Holloway has therefore had very little to spend, with free transfer signing Josh Scowen the only significant addition this season. After struggling last season it looked like they might be relegation candidates this season, but a decent start, and decent home performances, including a win against leaders Wolves have kept them out of danger so far. They currently sit 16th with 36 points from 31 games.

We approach this game following a terrible performance in losing at Cardiff on Tuesday, where we were heavily flattered by the 2-0 scoreline. This was preceded by encouraging performances at home against high flying Bristol City and Fulham, where great spirit was shown in getting 1-0 and 1-1 results. Wheater and Little were rested on Tuesday, whilst Pratley is close to full fitness after recovering from his fractured leg, and Parky has declared an intention to keep rotating his front players. So it will be interesting to see how we line up in the kind of game that we should be competitive in. Which BWFC will turn up? Lets hope Parky can get a reaction following terrible Tuesday and we battle our way to a result. I am predicting 1-1. COYW.
Top

Pratley is possibly back which would be a huge boost and offers some hope we might not have to suffer another lethargic Derik performance.

Massive, massive game this. Crucial we take something from it. Otherwise where on the road will we pick up points? And we're going to need some.
Top

Seems to me there's not much between these teams except our bloody rubbish away form.

The good news is that the form doesn't have to pick up ridiculously to lift us up the league: from the last 8 trips we've won 5pts, but that's only 5pts fewer than Sheffield Wednesday, who are 15th in the last-eight-trips form table.

On the subject of form, here's interesting: relative form, which is defined here as PPG in the last 8 games minus the overall season PPG. Bolton and Birmingham are in form and hauling in Forest and Reading above us. 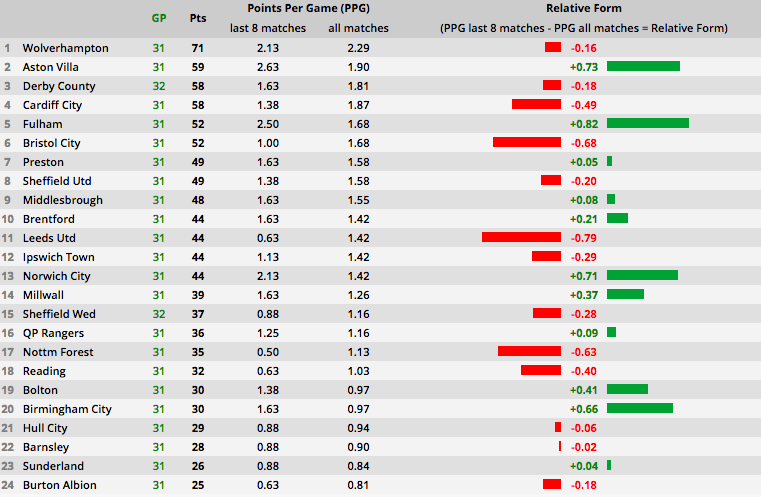 That's pleasant but will drift away again unless we start getting points on the road. I don't care if it's a scabby 1-0 with a long-ball bouncing in off the keeper's head. This sprint of eight games in a month before the next international break includes five trips: to Cardiff (currently 3rd in the 2017/18 home table), QPR (12th), Norwich (18th), Reading (22nd) and Sheff Wednesday (16th). (We've then got two tough ones, to Leeds (14th) and Derby (4th), before finishing with two six-pointers at Barnsley (21st) and Burton (24th).) Of those five trips, we've had what should be the hardest; from the remaining four, we should IMO be targeting six to eight points. Sounds big but we can't hide behind a defeatist attitude to away games, it will put too much pressure on the home returns. If we can start bagging more away points, we'll go a long way toward safety.
Words
Top

QPR spent ~£500,000 on a player in the summer. Making BWFC the only club in the championship this season to have spent no money on transfer fees.
Top

Up to the sale of Madine, the reason was pretty simple we had no money to spend, a fact known in Outer Mongolia and the Maldives. . Since we sold him we can now pay the staff. Not rocket science
Si Deus pro nobis, quis contra nos?
Top

Prufrock's favourite might be back. According to the BN, D-Pratz "returned to full training yesterday" and "could make a surprise return to Phil Parkinson’s squad on Saturday at QPR".
http://www.theboltonnews.co.uk/sport/wa ... Wanderers/
Quoth PP:

We have missed Darren. He was exceptional for us before he got injured and while the points return has not been bad with him in the team we welcome him back with open arms because he’s a real leader.
Daz leads by example. He does all the horrible things on a football pitch that you have got to do, wins headers, second balls, gets up to the opposition quickly to stop them playing. When he’s ready he’ll be back in the team.
He has done a lot of work over the last couple of days. We will look at how he does in training and then make a decision from there, but it’s good to have him back available because he has been important for us.

Elsewhere on the BN, PP is confident we won't have two duff games on the bounce.
http://www.theboltonnews.co.uk/sport/wa ... Parkinson/

It doesn’t happen to us often. We have to make sure we learn the lessons from that. Whenever you go away from home you have to make sure you get the basics right and we just didn’t do that against Cardiff. We will dust ourselves down and make sure that things improve at QPR.

Which set me thinking about road doubles - successive away fixtures, midweek/weekend or weekend/midweek. Here's what we've had this season:
Sat 12 Aug D 1-1 Millwall / Tue 15 Aug D 0-0 Birmingham - felt at the time like two missed opportunities, but given we then went on an eight-match losing bender in which we scored one goal (an injury-time consolation) it felt in retrospect like Happy Days.
Tue 26 Sep L 0-2 Bristol City / Sat 30 Sep L 0-1 Villa - the last two games of that loss-binge, and the first two appearances for Karl Henry. Shoots of recovery.
Sat 28 Oct D 1-1 Fulham / Tue 31 Oct D 3-3 Sunderland - felt to me like two missed opportunities, but on the bright side we did well at Fulham and rallied well at Sunderland after a collapse.
Tue 26 Dec L 0-2 Boro / Sat 30 Dec W 1-0 Sheff Utd - witless on Teesside, delirious (if slightly fortuitous) in Steeltown. A win!
Words
Top

One win out of two would be better than two draws, so I'm not of the opinion that we have to get something here. It's imperative that we don't lose Tuesday though.

I'm going for 0-0 Saturday
"Get your feet off the furniture you Oxbridge tw*t. You're not on a feckin punt now you know"
Top

Harry Genshaw wrote: ↑
Thu Feb 15, 2018 4:23 pm
One win out of two would be better than two draws, so I'm not of the opinion that we have to get something here. It's imperative that we don't lose Tuesday though.

One point out of the two wouldn't be enough.

I think losing puts too much pressure on the Sunderland game, which will be far tougher than people think. If we win only one then best its Sunderland but equally lets start picking up some points on the road because otherwise one or two home blips will end up being terminal.
Top

Harry Genshaw wrote: ↑
Thu Feb 15, 2018 4:23 pm
One win out of two would be better than two draws, so I'm not of the opinion that we have to get something here. It's imperative that we don't lose Tuesday though.I'm going for 0-0 Saturday

Every game's a cup final H.G.. Win tomorrow and it would/will be a massive confidence boost for Tuesday. Four points from two games any whichway will be very satisfactory. (six even better mind.)

Jem has been training well and I think he comes into the thinking for QPR. I have said before that he has been training extremely well, so it gives me a decision to make. With the number of games coming up we knew there would be opportunities for players who have not featured as much. And often in these cases, it’s the attitude of players who are not in the team which is just as important as those who are.

Meanwhile, let's not give up on half our games.
http://www.theboltonnews.co.uk/sport/wa ... ay_up_quot_/

We have to pick up points away from home if we are going to stay up. We can’t simply rely on that home form, which has been excellent. We need to look at ourselves very closely. When you go away from home you have to have a different mentality and be willing to work that little bit more for a result, sometimes. We need to go to QPR and be ready to stand strong as a team. We have put an almighty effort in recently and the performance (at Cardiff) did not live up to those standards. But we have got to shrug off that result now and be ready for what will be another tough game against QPR, who are a very competitive Championship side.

Anybody awake and looking forward to the entry of the gladiators? ...Another big day ahead..

Working today sadly but will be cheering them on inside. C'mon Wanderers
"Get your feet off the furniture you Oxbridge tw*t. You're not on a feckin punt now you know"
Top

If the plan is to invite them onto us and then hit them on the counter, that's a decent enough starting eleven to try it with.
Top

Sunderland one down already.
People haven't got a good word for you, but i have T**T.
Top

Downer- no Tango:( Hope all ok on that front.
Brentford 1 up only action so far.
I'd like us, Brentford, Burton (contentious I know) & Millwall wins today please...
Top
Post Reply
96 posts

Users browsing this forum: No registered users and 5 guests