Their pet name for Ken, who's having it large 'round his house tonight?

Edit. Fanny's was closed tonight so it looks like they had it booked for a party regardless.

I used to have a pint or two at Fanny's in the 1960s after a few sets of tennis. I've just googled it and it appears to have changed out of all recognition. I don't think I knew Fanny though, whoever she was. Friend of Tango's?
"If you cannot answer a man's argument, all it not lost; you can still call him vile names. " Elbert Hubbard.
Top

I'm a bit rough this morning....plenty of beers sunk yesterday after the game

I still can't believe the last 10 mins, that was unreal but what a feeling....still fist pumping every 5 mins !
Top

Still chortling at the mugs who 4ucked off out when Forest's second one went in.

And still can't quite believe what actually happened after it did.

Stuff of legend yesterday and what makes it all worthwhile. The players must have been distraught when Forest went ahead. The way they rallied and refused to give up was magical. The commentators on Tower went absolutely screamingly bonkers when first Dave Wheats and then Wilbraham scored (and having seen it half a dozen times,that header wasn't quite as simple as it might have looked at first) Wife was out with my daughter and the kids. so I could behave like a maniac-which I duly did) ..Fantastic

Bloody Wilbrahimovic saved it for when it really matters! Hooray.
In a world that has decided
That it's going to lose its mind
Be more kind, my friends, try to be more kind.
Top

I don't know if there will ever be a feeling like that again in my lifetime. Not unless we win promotion to the PL with the last kick of the game or win a cup in the dying minutes.

It's a funny old game.

Can we name a stand "Wilbraham's forehead" ?
CODE: SELECT ALL
Top

TANGODANCER wrote: ↑
Mon May 07, 2018 9:13 am
The commentators on Tower went absolutely screamingly bonkers when first Dave Wheats and then Wilbraham scored (and having seen it half a dozen times,that header wasn't quite as simple as it might have looked at first) Wife was out with my daughter and the kids. so I could behave like a maniac-which I duly did) ..Fantastic

Barring Radio Tango I didn't have commentary so got the goal news off Jeff Stelling on Sky – I'm fairly sure I burst into tears while shaking my head and saying DON'T YOU F**KING F**KERS F**K IT UP AGAIN. I kept typing - I was texting The Legendary Flanners at the ground, as well as updating TW with tables etc - and, fittingly for the thread title, shaking like a leaf.

Actually, here's the text thread to Flanners. Although trained professionalism somewhat went out of the window toward the end, I think you can probably piece together the pattern... 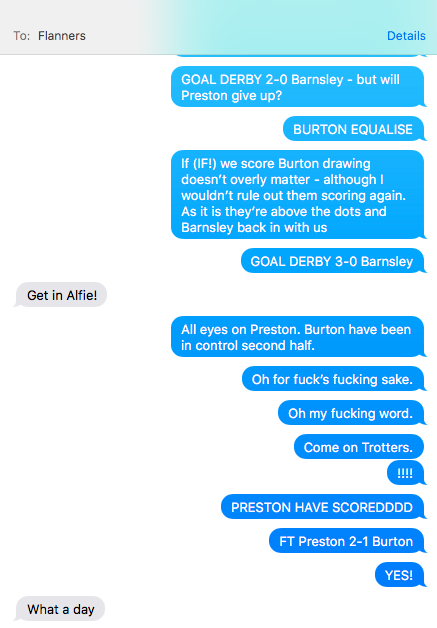 Can't see it too much. That header from Wilbraham was immaculate; he placed it in just the right area. Brilliant.

TANGODANCER wrote: ↑
Mon May 07, 2018 2:15 pm
Can't see it too much. That header from Wilbraham was immaculate; he placed it in just the right area. Brilliant.

It really is superb. They way he cuts across the back of the defender to come near for it, then applies the perfect touch with his head. A truly superb goal, and a name to be ranked alongside that of Fabian de Freitas.

TANGODANCER wrote: ↑
Mon May 07, 2018 2:15 pm
Can't see it too much. That header from Wilbraham was immaculate; he placed it in just the right area. Brilliant.

It really is superb. They way he cuts across the back of the defender to come near for it, then applies the perfect touch with his head. A truly superb goal, and a name to be ranked alongside that of Fabian de Freitas.

I thought the play by Le Fondre deserved the plaudits for the most part. Instinctive run followed by a glancing look across to make sure he was there before whipping in a perfect cross for the assist. Quality all round from both players.
Top

Alfie changed the game. Tremendous performance. He's earned the right to be our top striker next season, and deserves a proper partner to play off. Proving wrong all the people who called him lazy or not good enough. And he seems to really care about the club. Top man.
Top

truewhite15 wrote: ↑
Mon May 07, 2018 8:38 pm
Alfie changed the game. Tremendous performance. He's earned the right to be our top striker next season, and deserves a proper partner to play off. Proving wrong all the people who called him lazy or not good enough. And he seems to really care about the club. Top man.

He's an impact sub. End of story. Great to come off the bench. Lead the line for 90 minutes? Not in a million years.

On an amazing day, Parky, inspite of all the "experts" pre game, got it right. Wilbraham led the line better than ALF can. He grafted and held it up and occupied defenders. We've badly missed that.

Then ALF came on with fresh legs for half an hour of running to support Wilbraham. It was the perfect tactical plan for the players we have available.
Top

That game was up there with Reading 95 for me. Right up there. Not sure any other single game in the time I've been watching has been as dramatic as those two. In fact I'd say Sunday pipped 95 for me, simply because in 95 we were a good team at Wembley going for promotion. Coming from 2-0 down was heroic, but in hindsight we had the players to do it.

Yesterday having scored 3 goals in the previous 7 games to be on 86 minutes and losing 2-1 I don't think a single person in the ground thought we could turn it around. Everyone was supportive because we'd put a hell of a shift in, and clearly given it our all. But for a team that struggled to score, to get 2 in the remaining few minutes in that scenario seemed outlandish. Especially as alongside that we needed Burton to not score again against a 10 man Preston.

Those few minutes were also probably more crucial to the future of the club than the Reading game, given in our financially perilous position relegation and the loss of income could have been terminal, if not terminal, certainly unlikely to see us compete in this league again for a while.

As much as we did to our credit, keep knocking on the door, at 85 minutes it looked as likely that Forest would get another goal on the break against clearly tired legs and minds, with spaces left vacant at the back.

It was at this point that an elderlyish man who sits just in front turned to me, shook my hand and said "well that's that but we'll all be here next season". I laughed and said "yeah hopefully the club will still be here too". As background this guy has been going to Bolton games since the late 60's and took his son and his friend for years. His son sadly passed away a few years back whilst we were still a premiership side. I don't know the details. We've always chatted briefly and talked about the Wanderers and such but I don't know his name nor he mine. On 85 minutes we enjoyed a quiet minute of consolation with each other, but knowing that we'd both be there to put ourselves through the torture again. He has told me last season that he only comes nowadays so he can "tell his lad what's going on". Anyway he usually leaves early and as he shook my hand and we shared consolations he was about to get up and get away. But then someone in front of him turns to wish him a good summer etc. He's up and leaving and halfway down the steps, then suddenly Wheater scores. He comes back to stand at the end of his row, clearly hedging his bets. A minute later he's in tears. And so am I.

That folks, is what football is all about. I've never cried about football before either in despair or elation. I did on Sunday and so did an awful lot of fully grown men. Not sure how many will admit it. But there we go.
Top

Great post that BWFCI. The raw emotion once we had done it was incredible. I think our recent near death experiences as a club make days like this even more raw, and therefore more special It was great to share that moment of survival with those who sit near you at every game. A guy in front of me, approx fifty years old, big guy, sits there stoically each game, turned round at the end wiping dust from his eye. I was just embracing everyone around me at the end. It felt we had all climbed a mountain together this season, having had cramp and breathing difficulties from the very start, still trudging on when there was little hope of making the top, then having got a second wind, be almost forced off it by a storm, then suddenly when all seemed lost finding something inside to make a spurt to the top.

I must confess that I am still re-watching the highlights over and over again, even now.
Top

Well, I am half way around the world and watched it on my phone. It was incredible. After Forests 2nd goal, I accepted our fate and my misery for the next month until the World Cup. Then it happened, then the magic moment happened. I still watch that 3rd goal with commentary over and over again. I am still in tears each time I watch it. And I am NOT a crier!! Unbelievable even now.
Top

I literally thought of this man and his cheering at Cardiff when the final whistle went. 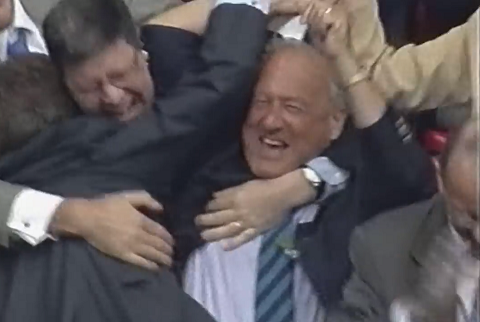 Knowing what it was like in our game, in retrospect, how must fans of Burton and Barnsley have felt Sunday watching the scores evolve? To think you're safe with four minutes left and then see not an equaliser, but then a winner go on the airwaves for the one club that can send you down must be pretty awful (oh, aye, we know all about it don't we) . Football fans are fans the world over and Barnsley and Burton on Trent must have been pretty grim places for either. Chin up lads, you'll be back. Best of luck for next season.
Si Deus pro nobis, quis contra nos?
Top

(and furthermore, would you mind coming on loan to us next season, upon which all would be forgiven?)

Oli McBurnie's dad sometimes works out of our office, and I had a quick chat with him the other day. I got the impression that he (Oli - not his dad) would be in no rush to play under Parky. Don't know if the departure from Bratfurt was on bad terms, but think much of the shenanigans McBurnie was involved in at the Barnsley game might have been aimed at winding Parky up.
Top
Post Reply
244 posts

Users browsing this forum: No registered users and 3 guests