This will be a tough sell on iFollow... not just a dead rubber for us, but also Newcastle's U21s, who with a 3-0 defeat at Shrewsbury and a 1-0 loss at Crewe are one of eight literally pointless teams in the Sherpa Van groups. Oh except it's now the Papa John's Trophy. Oh yes.

Although it's four days after our best performance of the season, Evatt will surely sacrifice momentum for rotation. But how much? Well, the EFL, wary of disrespeck inna area, has a detailed list of rules on how much jiggery and indeed pokery managers can indulge themselves in. To whit, via the freshly-sponsored rules pages:


7.3  Each EFL Club shall play its Full Available Strength in and during all Matches. Full Available Strength means the EFL Club must include at least four Qualifying Players in the ten outfield Players named in the starting eleven on the Team Sheet.
7.4  Qualifying Player means any Player who:
7.4.1  had started the immediately preceding First Team Fixture (as defined below);
7.4.2  subsequently starts the immediately following First Team Fixture;
7.4.3  is in the list of ten Players at the Club with the highest number of starting appearances in First Team Fixtures in the same Season;
7.4.4  has made forty or more starting appearances in First Team Fixtures or international equivalents (and not limited to the same Club or Season); or
7.4.5  is on standard loan from a Premier League Club or any EFL Club operating a Category One Academy.
7.5 First Team Fixture means the League Competition, Premier League, EFL Cup or FA Challenge Cup (but shall, in the context of Rules 7.4.3 and 7.4.4 only, also include this Competition).
7.6 Any EFL Club failing to meet the requirement to play Full Available Strength will be required to pay a fine of up to £5,000.

So we have to pick four outfielders - goalies don't matter - who either played last time, will play next time, have played the most times this season or have played a decent number beforehand.

7.4.1 (last time): Outfielders v Salford were Baptiste, Santos, Delaney, Kioso, Tutte, Sarcevic, Crawford, Jones, Delf and Doyle, but I fully expect all of them to be rested; maybe Jones could do with some minutes in the legs but after covering 11.5k on Friday (per Evatt) he's better resting up for the weekend.
7.4.2 (next time): dunno, but probably the above.
7.4.3 (most apps this year): that would be (in descending order) Crellin, Santos, Delfouneso, Crawford, Sarcevic, Delaney, Doyle, Baptiste, Brockbank and in joint-tenth place Kioso/White/Gordon. White is exempt anyway under 7.4.5 – Blackburn’s Academy is Category One, but Luton’s is Cat Three so Kioso doesn’t come under that.
7.4.4 (40+ senior apps): besides various names above, this adds Taft, Comley, Miller and Isgrove.

So in other words, we can change the entire XI if we play four from White, Comley, Taft, Gordon, Isgrove and Miller, which he might want to do anyway.

So I'd go:
• GK Crellin (although I'd be tempted to try Alexander, it might be too harsh on Billy)
• RCB Senior (on the right of the three; played 90 and scored in the last Sherpa Van game at Shrewsbury)
• CCB Greenidge (as the sub-Santos in the middle)
• LCB Taft (done nowt wrong IMO but Delaney is more solid)
• RWB Hickman (hasn't played a single minute in the eight games since 10th October)
• DM Comley (Needs to put pressure on Tutte)
• CM White (as a Sarce type)
• CM Darcy (as a Crawford type)
• CF Miller (would like to see him break his current longest-appearance record of 29 minutes)
• CF Gnahoua (didn't do terribly, needs minutes, a sub-Delf really but would probably lead the line better than Isgrove)

Isgrove on the bench with Riley and whoever else.

Will I watch? Dunno...
Words
Top

I’d go with your team but start Isgrove instead of gnouha who I’m not convinced is a forward and given he’s started about 5 games I should really know!

Might be a game for Alexander to play - it’s a dead rubber against fellow youngsters. Let’s not forget Crellin goes back to Fleetwood, Alexander is ours.
Top

Good assessment DSB and thanks for the info. Unfortunately, I can't see me putting in as much effort tomorrow in front of the laptop and I'll be giving it a miss.

It's been a good competition for us in our not too distant past but I think it's had its day. How the EFL thought it was a reasonable idea to (a) invite big clubs academies to compete and (b) fine their member clubs if they fail to show sufficient respect in helping develop these academy players, is beyond me.

2-1 win.
"Get your feet off the furniture you Oxbridge tw*t. You're not on a feckin punt now you know"
Top

Looks like a George Thomason is getting some minutes. Seems to have overtaken Sonny Graham, who could do with some loan time.
Top

officer_dibble wrote: ↑
Tue Nov 17, 2020 2:08 pm
Looks like a George Thomason is getting some minutes. Seems to have overtaken Sonny Graham, who could do with some loan time.

Indeed, if you've not seen the news, Thomason has been recalled from his Bamber Bridge loan and is "set to be involved" (sez official site) tonight.

Is he, by chance, left-footed?

He won’t have played since the end of last month of course.
Top

officer_dibble wrote: ↑
Tue Nov 17, 2020 2:08 pm
Looks like a George Thomason is getting some minutes. Seems to have overtaken Sonny Graham, who could do with some loan time.

I though Reagan Riley was the NBT. He was replacing any of our midfield about 10 games back...
Top

Changes doesn’t it. Graham played a bit last season and I’m guessing is a year older than Riley? I thought he was a tidy footballer and I suspect he would have got a load more game time had we finished last season particularly as we were due to be relegated about 5 games before the end!! I can’t even remember him playing a friendly this summer - he’s quite short from memory whereas Riley was tall and a bit more filled out. Maybe that’s counted against him.
Top

Had they included a large Papa John's Mexican pizza with additional cheese, a portion of Marmite & cheese scrolls, hot buffalo wings, a Giant double chocolate brownie and a large bottle of 7up all delivered to my door into the iFollow package then I may have taken them up on it.

Being as they haven't they can feck off; I'm going for a run instead.

I think I'll be clinging to my tenner, too.
Top

Will check Iles' live text, but not a chance I'd pay for this one.

Good chance for the fringe players to have a run out and hopefully stake claims for league starts in the future.
Top 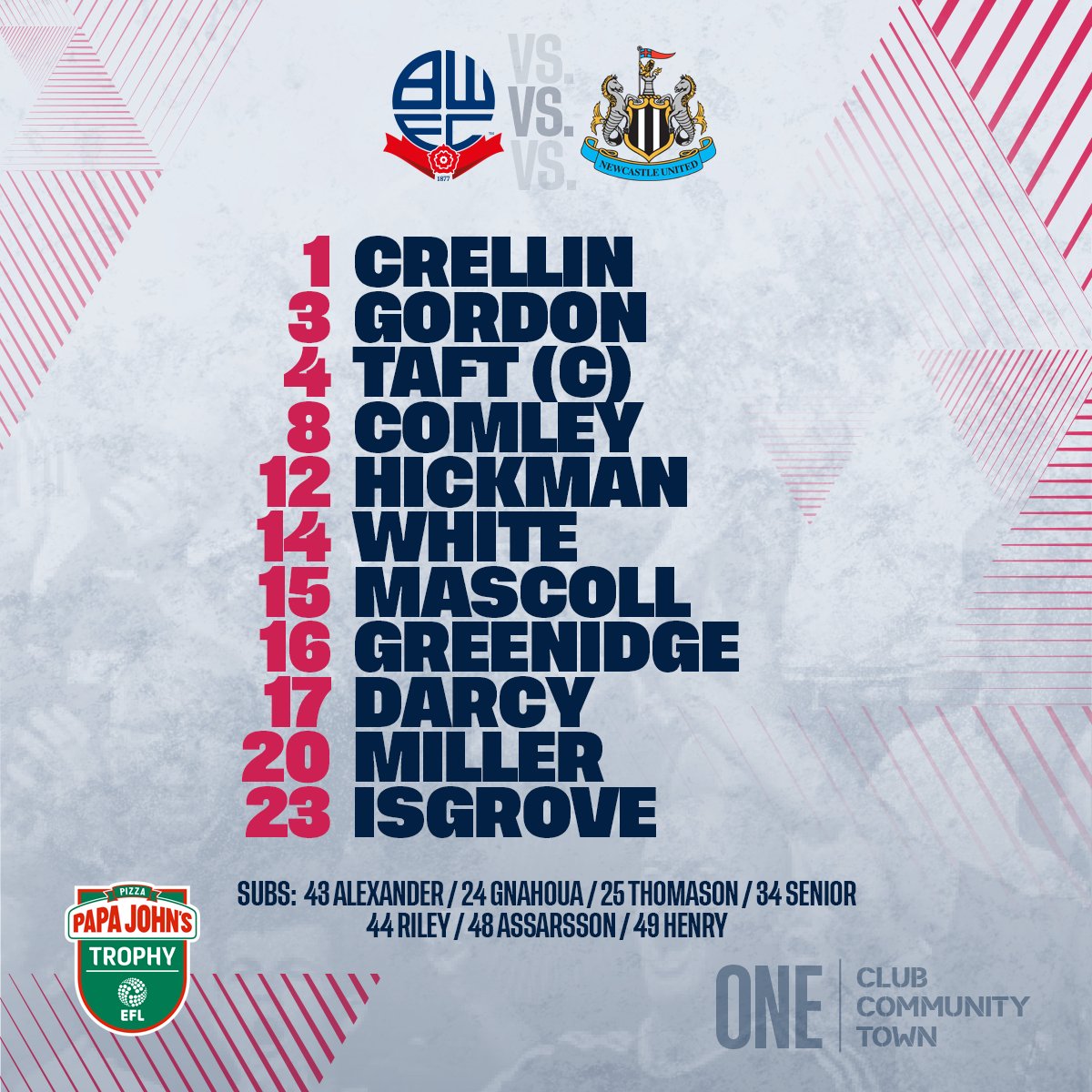 Teams in for anyone thinking about it! It’s about as predicted with everyone changed.
Top 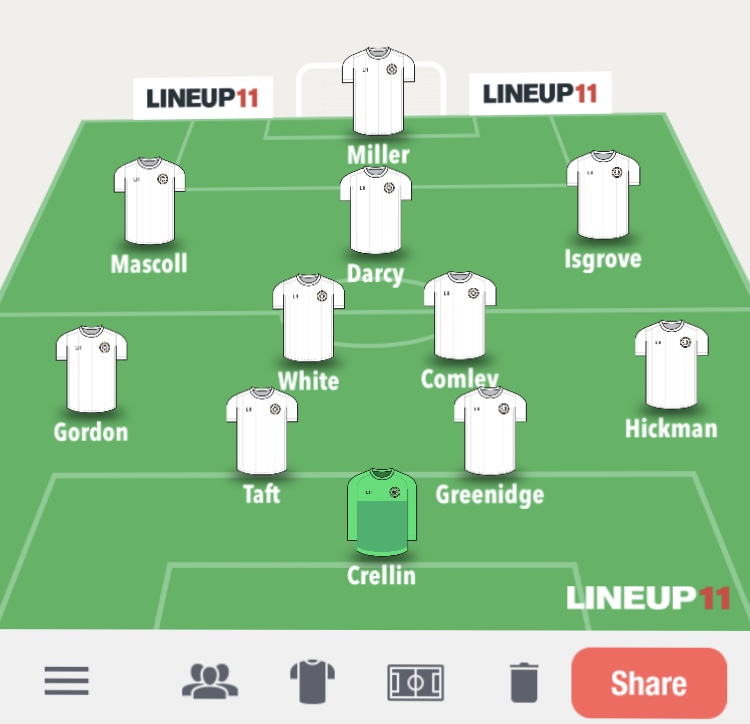 I can't see another centre-back bar Taft and Greenidge, or another striker bar Miller, so unless someone's being sent out as square peg then...

Miller's more of a 10 than a lead striker but y'know.

I used to quite like going to the reserves, free with the ST, sit in the drafty Manny Road shooting the shit with mates...

EDIT ha, Brommers got there first wiv picktures an everyfink

Hmm - looks initially like a back three (L to R Mascoll, Taft, Greenidge)

EDIT aye. 3-4-3 with Isgrove left and Darcy right of Miller; White and Comley doing the shift in midfield, with Gordon and Hickman wide.
Words
Top

Goal Newcastle. Comley gets the ball in the D from Crellin's GK, turns blind, is robbed, 0-1.
Words
Top

Classic Comley, classic Crellin.
In a world that has decided
That it's going to lose its mind
Be more kind, my friends, try to be more kind.
Top
Post Reply
83 posts

Users browsing this forum: No registered users and 30 guests