New ground, anyone? Actually, Bolton have been to Plough Lane once before, getting tatered 4-0 in January 1984 by a Crazy Gang on the way to 97 goals and promotion, but by the time the two clubs faced off regularly in the 1990s the Dons had left their old cabbage patch.

Now it’s back, sort of: a nearby newbuild finally marking their return to their home borough. They’ve had some limited-attendance test games but this is the official unveiling.

Perhaps tidy with anticipation, the Wombles have started well, winning in the league at Doncaster and the League Cup at fellow former refugees Charlton. After watching his Bolton team draw against possession-hungry MK Dons and hard-running Barnsley – the latter followed by penalty shootout success – Ian Evatt is predicting another type of battle, a largely physical one.

Having made five changes for the League Cup, the manager faces a similar number of selection choices this weekend.

Joel Dixon’s clean sheet and shootout save may not be enough to displace Matt Gilks but they should be enough to make the incumbent very wary of playing badly enough reignite that conversation.

Fit-again Declan John should replace the improving but unfinished Liam Gordon at left-back, with Gethin Jones continuing on the other side, but Evatt’s choice for his central two is much tougher. Ricardo Santos grew into the midweek game and his physicality will be needed, but it’s tougher to say whether Evatt will pair him with the wily Alex Baptiste or young George Johnston, a very promising summer signing indeed.

In the midfield trio - which seems to have pivoted from two-behind-one to one-behind-two – we can safely assume anchor MJ Williams at skipper Antoni Sarcevic will play. Evatt could complete the triumvirate with the silky passing of Josh Sheehan or the hard-working nous of Kieran Lee; while either would make sense, arguably act man would be better for a different phase of the game - Lee to win the ball back and Sheehan to use it, assuming Boton will have majority possession. Might also be worth considering the upcoming midweek fixture at Lincoln, which would appear on paper a tricker trip and perhaps more suited to Lee. Either way, the man left out of the XI is likely to come on as sub.

It’s in the front three that Evatt has big decisions to make. Although Nathan Delfouneso’s lacklustre cup showing may have earned his chances and Dennis Politic is set to go on loan, last season’s run-in shoo-in of Dapo Afolayan, Eoin Doyle and Lloyd Isgrove are now genuinely threatened by Amadou Bakayoko and Elias Kachunga (with Xavier Amaechi unfortunately injured).

Dapo and Isgrove should have the legs to start both imminent trips, especially with the chance of rotation in the last half-hour. But it’s possible Evatt will consider the opposition and lean away from Doyle towards the more physical Bakayoko, with Doyle and Kachunga coming on as subs against a tiring defence.

Whoever’s in the XI, this is an interesting game for Bolton. Having finished 18th, 19th or 20th for each of the last four seasons, the Dons aren’t among the third tier’s more frightening teams. That doesn’t mean they’re pushovers, but it does mean that a loss could render the opening pair of draws in a new, less flattering light. Evatt is a fast learner and with a League Cup derby at Wigan to schedule in, he’s facing seven tests in the opening 22 days. In the week of A-level and GCSE results, Bolton fans will be hoping their promising manager keeps making the grade.
Words
Top

Dave Sutton's barnet wrote: ↑
Fri Aug 13, 2021 12:03 pm
Dapo and Isgrove should have the legs to start both imminent trips, especially with the chance of rotation in the last half-hour. But it’s possible Evatt will consider the opposition and lean away from Doyle towards the more physical Bakayoko, with Doyle and Kachunga coming on as subs against a tiring defence.

I hope this is the plan. Doyle on current form doesn't fill me with confidence as a starter away from home.
...
Top

Other than that think its what I'd play. Though I'm in two minds on Lee vs Sheehan.
Top

Other than that think its what I'd play. Though I'm in two minds on Lee vs Sheehan.

That'll be a right kick in the nuts for Dixon. Clean sheet and penalty save vs Gilks last weekend? Easy pick for me. I like Gilks and he may well come back in but if you have genuine competition for places it has to be fair
...
Top

Other than that think its what I'd play. Though I'm in two minds on Lee vs Sheehan.

That'll be a right kick in the nuts for Dixon. Clean sheet and penalty save vs Gilks last weekend? Easy pick for me. I like Gilks and he may well come back in but if you have genuine competition for places it has to be fair

Equally your ditching the bloke who came in and was the biggest singular player in turning your season round last time that ended in promotion after one dodgy game. Be like dropping Jussi after a bad game to play Steve Banks or something, or indeed Adam Bogdan... So I think personally that as well as Dixon did on Tuesday that (I'm assuming here) a relatively physical and direct Wimbledon side might be a challenge for him and I'd hope with Gilk's experience he'd come through it.

I wouldn't be unhappy with Dixon starting like - its just if it were my call I'd pick Gilks.
Top

It' could be that evatt was giving them a game each and then deciding. He could certainly say that without it looking too harsh on Gilks. I suppose the fairness of it depends on what Dixon has been told to expect, which we don't know. Equally, I'd be delighted to see Gilks shake off thr cobwebs and have a blinder.
...
Top

Some might say the single biggest contributor to our promotion was Eoin Doyle, and plenty (inc me) would rotate him out tomorrow. Not quite the same but bit Dar off.
Words
Top

Dave Sutton's barnet wrote: ↑
Fri Aug 13, 2021 3:07 pm
Some might say the single biggest contributor to our promotion was Eoin Doyle, and plenty (inc me) would rotate him out tomorrow. Not quite the same but bit Dar off.

Yeah that's absolutely fair but I guess the subtle difference is Doyle would probably left out for tactical reasons and he would likely still play a part in the game. And would start potentially the next game too. The thing with the keeper is its harsh on Dixon to leave him out but also incredibly harsh on Gilks to lose his spot after one game. Ideally you don't want to be chopping and changing your keeper.
Top

What's bit dar off ? West Indian patois.
People haven't got a good word for you, but i have T**T.
Top

I'm not sure last season has any impact on this. Equally, I don't think Gilks single handedly turned our season around. For me, the turn around didn't occur until late January. Gilks was a decent contributor to it, though.
Top

It’s not about fairness, it’s about who is best for this match and given that much of Wimbledon’s attacking will be aerial, I’d go for Gillo every time. At the back it has to be Rico and Baps and in midfield MJ and Lee. I like Sheehan but Lee is stronger so I’d keep Josh for Lincoln on Tuesday. Up top Doyler just isn’t fit and though he works hard I think Baka should start to rough their defence up a bit before Doyle comes on later. Despite his poor performance last weekend, Dapo has to start on the left and since Izzy and Gordon work so we’ll together down the right, Izzy gets to start leaving Kachunga to replace either winger later. It’ll be a toughie and another draw wouldn’t be a bad result but it’s so much better to spoil people’s parties so let’s hope we can squeeze a win.
Top

Yeah sorry my food arrived and my standards slipped. “Not far off.”
Words
Top

Tough choices to make which is great! We are a much stronger unit than last season that's for sure. Gilks to start as he is still our #1 but we would need Dixon on the Bench to cover for injury. Away from home Isgrove plays for his work rate; Baka plays central.. Doyle needs to improve his sharpness. Dont know how effective he will be coming off the Bench though. Central Defense.. hmmm.. Don't know if both Santos and Baptise can play Sat/Tues for fitness (Santos)/age (Baptiste) reasons at this moment. I would start Johnston in both and pair him with Santos tomorrow because of the physical nature of the game. Baptiste on uesday. Away from home I would start Lee over Sheehan.

Anyway, I am confident that regardless of who Evatt starts, we will be strong.
Top

It'll be a tough one this, excited crowd in a new ground and after 2 wins, they'll be well up for it. Another draw would be fine I reckon.
...
Top

Bang up for this.

V tough to call. Keep it tight in the first 20 and I back us.
In a world that has decided
That it's going to lose its mind
Be more kind, my friends, try to be more kind.
Top

Vinnie Jones joined the Wombles in 1984, I remember him in a night match at Burnden. Some idiot flicked a lit cigarette at him from the Lever end as he came to take a throw in. He picked the cig up, took a couple of swallows, grinned, cool as you please, gave a thumbs up and took the throw.

I was going to call this match thread "A trip to Bulgaria" to see how many remembered those days.

For me Baka's a lot better on the right than playing 9, I'd go with... 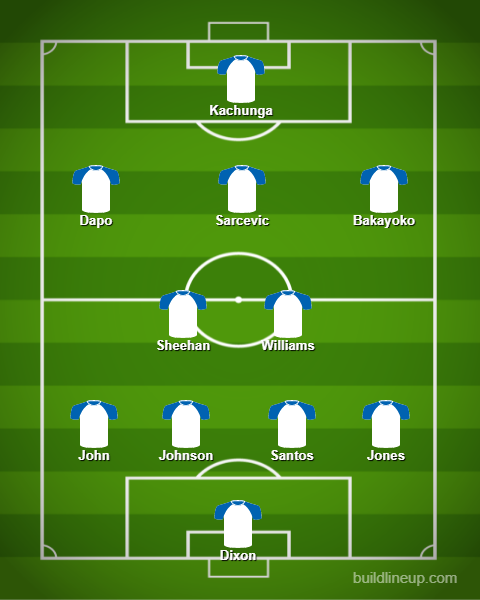 
I was at that game.