Wants four more. Likely to be loans to get us through the season - some younger, some older.

Remember loans can be made permanent if it goes well. See Andy Walker. But sometimes they’re just a short-term boost and well worth it for that. See Jack Wilshere.

And of course the incorrigible optimist still thinks we can get promoted. TBH aim glad about that. With life as it is right now it’s be a bad time to give up on possibilities.
Words
Top

Looks like the ITKer was ITK. You never know either could be try before you buy with squad and wage caps biting next season.
Top

According to my son-in-law who is a massive Lincoln fan this is what he text me back when I asked about Elbouzadi;

"Joined your lot on loan hasn't he? Cracking little player, plays out wide. Been playing and scoring for us in the Papa Johns trophy but we've brought in a lad from Man city on loan so that's why Zack is going out"

At least we'll be getting a loan player who is match fit and raring to go and who could make an immediate impact as opposed to a loan player who isn't fit and would need time to get up to speed. Some might say he can't be that good if Lincoln brought a loan player in to replace him but they are pushing for a second successive promotion and this time to the Championship so if the City lad is better than what they've got I don't blame them. Elbouzedi mIght be on a long contract but if Lincoln gained promotion to the Championship he might not be good enough for that level and Lincoln could release/sell him. There's many variables in the game of football right now so lets at least give the lad a chance.
Age and treachery will always overcome youth and skill!
Top


Bolton Wanderers have bolstered their squad by landing Lincoln City’s Zack Elbouzedi and Ben Jackson from Huddersfield Town on loan until the end of the season.

Elbouzedi, 22, is an Irish winger who joined Lincoln City in January 2020 from Waterford.

He started his career at West Brom where he came through their youth system, before playing in Scotland for Inverness Caledonian Thistle and Elgin City.

He has also represented the Republic of Ireland at every youth level from under 15s through to under 21s and has played in six games for The Imps this season, netting two goals.

Stockport-born Jackson is a pacy left-sided defender who joined the Huddersfield Town Academy at the age of 14 in 2005.

The 19-year-old has recently had loan spells with Darlington and hometown club Stockport County, and has made three appearances for The Terriers this season.

Wanderers Manager Ian Evatt told bwfc.co.uk: “Zack is a player who I have monitored for a good length of time. Lincoln are currently flying at the moment and have some very good players in his position. As a result of their form, Zack has struggled for game time. He’s a player with electric pace, is a match winner and gives us more options in the forward area of the pitch.

“Ben has been doing well at Huddersfield and has already played in the Championship this season. He can play in a number of positions but left back is primarily his role, which gives us competition for Declan and others. He’s very quick and good with the ball.

“We are excited to have them both.”

Elbouzedi added: “Everybody knows the size of this club and I’m delighted to be here. Hopefully, I can come here, play some games and help the club to progress.

”I’m 22 now and I just want to play regular football. I’m really eager to get going for Bolton Wanderers.”

Jackson commented: “I’m at an age now where I want to be playing senior football on a regular basis. To be able to come to such a massive club in a good league and getting some games is very important to me. I’m excited to get out on the pitch and get some games.” 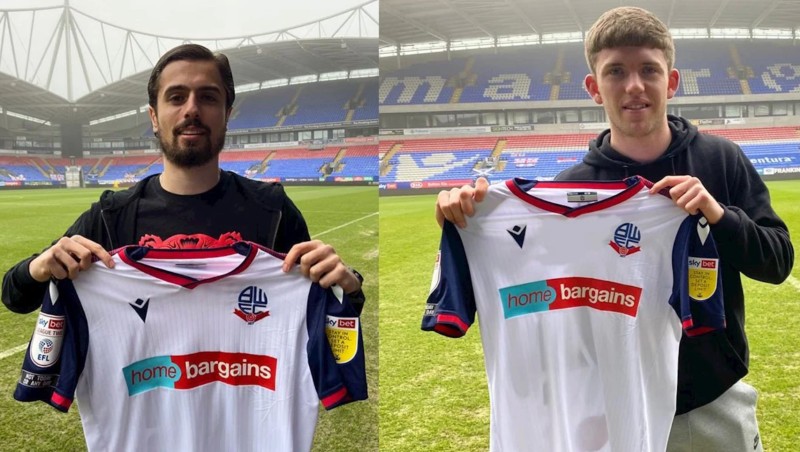 This season, Jackson has played 57 minutes in the Championship (subbed off), 77 minutes in the FA Cup, a full game in the League Cup. Another 24 (14 as sub) in Division Five for Stockport last year. He's contracted until 2022 with Huddersfield holding a year's option so he's a short-term option - presumably as back-up to the more experienced Declan John.

Elbouzedi has made 7 league appearances and 3 in cups since Lincoln signed him on a "long-term" deal in Dec 2019; although unconfirmed, this might well run out in summer (Transfermarkt thinks so) so this could very easily be something longer, especially if the Imps go up.
Words
Top

We've been downgraded from Massive Club to Big Club, judging by the entrance interview quotes from Elbo (as his Twitter handle calls him)
CODE: SELECT ALL .
The unquantifiable and essentially meaningless "bigness" of your club can fall as well as rise
Words
Top

All quiet on the goalkeeper front...
Top

Dave Sutton's barnet wrote: ↑
Mon Jan 18, 2021 1:10 pm
We've been downgraded from Massive Club to Big Club, judging by the entrance interview quotes from Elbo (as his Twitter handle calls him)
CODE: SELECT ALL .
The unquantifiable and essentially meaningless "bigness" of your club can fall as well as rise

Following closely on Kioso's heels as lesson #2 that Irish people don't always look how you'd expect them to.
In a world that has decided
That it's going to lose its mind
Be more kind, my friends, try to be more kind.
Top

CLUB GRADE UPDATE we're back up to Massive

We've signed Ben Swain at left back!
In a world that has decided
That it's going to lose its mind
Be more kind, my friends, try to be more kind.
Top

Can he play in goal, too?
Top

What happened to Bright Amoateng?
...
Top

'You don't deserve to live'.
Top

'You don't deserve to live'.

Missed the quotation marks around this at first

In a world that has decided
That it's going to lose its mind
Be more kind, my friends, try to be more kind.
Top

'You don't deserve to live'.

Missed the quotation marks around this at first

Its one of my all time favourite scenes. The disgust on Jamie's face as he tries to decide on a suitable admonishment before delivering that line...

Plays in whatever we call our youth team. I’m not even sure if they are in a league!
Top

I presume LIam Gordon is now back with us after his month-long loan with Dagenham & Redbridge. Haven't heard anything about them extending the loan so there's another one we need to get shipped out asap

Oh no he's staying at Dag & Red for the rest of the season...
CODE: SELECT ALL
Top

Suspect this is one move that may get made permanent- lad wants to play football and I suspect moving north in a pandemic has took its toll.
Top

He has been unfortunate. He started the season when the team wasn’t doing very well and suffered for that.

He came back and had Covid issues because of his partner. Then another family member got it so he had to self-isolate twice in two weeks. When you miss that amount of training in a short space of time you are playing catch-up. Ryan Delaney had been doing well, Reiss Greenidge has stepped in, and he has found himself down the pecking order.

But he is a great character, a good lad, and he has gone to Scunthorpe to get regular games, get up to speed and then he will come back in the summer where we can reassess where he is at.

It’s the nature of the beast in football that if you are not getting games then you have to go out and find them. George felt it was beneficial to him, I thought the same, and he has managed to get himself another League Two club where he can progress and get himself fit. As I said, we’ll reassess in the summer.

Whether we play a three or a four from here on in will depend on opposition. At Cheltenham, for example, we played three at the back, others we can use a four. We recruited in the summer to play a back three so we do have more numbers in that position and we also have Harry Brockbank, who can play centre-half as well as full-back.

Taft quotes make sense. There’s so much more to this season than any other.
Top

It kind of makes sense, but Delaney has been shaky lately and Greenidge doesn't look remotely close to being a league footballer, so I would have thought if Evatt rated Taft at all he'd at least be making the bench.
Top
Post Reply
503 posts

Users browsing this forum: No registered users and 25 guests